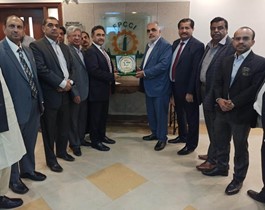 “In order to facilitate the exports, the Government should introduce a new scheme for imports-cum-exports of packing material whereby a notified percentage of inputs may be allowed to be imported at zero rate duties against FOB value of exports of Previous year with flexibility to import any product among the notified list in any quantity within the overall entitlement of the exporter.

Exporter should be allowed to use it in exports without the condition of mentioning these goods in Export goods declaration. However, if an Exporter is required to imports accessories/packing material in excess of 10% then he may use (SRO-492), (SRO 327-Export oriented unit) and (SRO 450-Manufacturing Bond). New Exporter may also use SRO 492(I)/2009 dated June 13, 2009 in first year to make their performance”. This was recommended by Engr. Daroo Khan Achakzai, President of the Federation of Pakistan Chambers of Commerce & Industry (FPCCI) in the meeting with Jawwad Agha, Member Customs (Operation), Federal Board of Revenue (FBR) who visited FPCCI and held a meeting with FPCCI members under the Chairmanship of FPCCI President.

The Member Customs (Operations), FBR, Jawwad Agha in response to the President’s suggestion regarding restoration of 20 days period for clearance of imported or exported goods from 15 days said that the period was reduced to 15 days due to avoid port terminal congestion. However, in case of default particularly for the LCL he agreed to consider downward revision of heavy penalty which at present Rs. 5000/- per day. Regarding reduction in utilization period from 24 monthsof input acquired for manufacture and export of output goods under DTRE, he informed that the time was reduced to boost the manufacturing and exports of goods and advised the importers to complete the cycle of manufacturing of goods within the stipulated time. He disclosed that integrated Policy, on the instructions of the Prime Minister Imran Khan is being prepared under which border markets and border warehouse would be established at all border crossing of the country to contain the smuggling. In response to a suggestion for data exchange between Pakistani and Chinese customs agencies to curb under-invoicing, the Member Customs (Operations), FBR informed that during the Prime Minister’s visit to China the agreement has been signed and would be initiated soon.