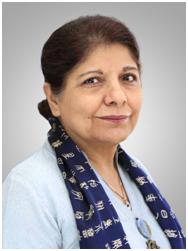 Karandaaz Pakistan is pleased to announce the appointment of Dr. Shamshad Akhtar as its new Chairperson, Board of Directors. Dr. Shamshad Akhtar replaces Dr. Ishrat Husain, who served as the Chairman of Karandaaz Board since the time of its inception in 2014. Dr. Ishrat stepped down following his appointment as Advisor to the Prime Minister of Pakistan on Institutional Reforms and Austerity.

Dr. Shamshad Akhtar has had a broad based development career in leading national and multilateral organisations spanning over 37 years. She has served as the Governor of the State Bank of Pakistan, Under Secretary General of the Economic and Social Commission of the Asia and Pacific (UNESCAP), Senior Special Advisor on Economics and Finance and Assistant Secretary General UN, the UN Secretary General’s G20 Sherpa, Vice President, Middle East and North Africa (MENA) at The World Bank, and Senior Special Advisor to the President of Asian Development Bank (ADB). Most recently, Dr. Shamshad Akhtar served as Federal Finance Minister in the caretaker government prior to the general election of Pakistan in 2018.

Dr. Shamshad Akhtar has advised various governments and the private sector in specific areas of development, governance, poverty, privatization, and public-private partnerships in numerous sectors. As Governor of the State Bank of Pakistan, she was nominated Asia’s Best Central Bank Governor by the Emerging Markets Group in 2006 and Bankers Trust in 2007. She was also amongst Asian Wall Street Journal’stop ten Women Business Leaders in 2008. .

Karandaaz Pakistan is a not-for-profit Company established in August 2014 and focuses on fostering economic growth and creating jobs through financial inclusion of unbanked individuals and unserved enterprises, with a special focus on women and youth. Since its inception, Karandaaz has enabled investment of PKR 24 billion in micro, small and medium businesses, and PKR 657 million towards digital financial services. These investments have reached more than 650 SMEs and supported an estimated 11,000 jobs in SMEs and 430,000 jobs in micro enterprises. Karandaaz Pakistan receives financial support from the UK’s Department for International Development (DFID) and the Bill & Melinda Gates Foundation (BMGF).