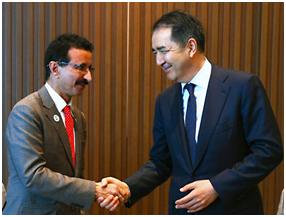 Infrastructure is bedrock of trade and economies, leading to prosperity for people, according to global trade enabler DP World Group Chairman and CEO Sultan Ahmed Bin Sulayem, who sat with President of Kazakhstan, Nursultan Nazarbayev, for a roundtable discussion in Baku this week as part of the Astana Global Economic Forum 2018. Discussions focused on exploring Kazakhstan’s future responses to global challenges and the role of business, government and international organisations to enable growth. Mr. Bin Sulayem also addressed the conference, highlighting the investment of successful nations in their infrastructure, multi-modal transport systems, digital technologies and up skilling of their people to develop further. He highlighted Kazakhstan’s 2050 economic strategy, plans to become one of the top 30 most developed nations and its USD 9 billion ‘NurlyZhol’ initiative to enable infrastructure growth, commerce and entrepreneurship as examples of long term thinking.

DP World Group Chairman and CEO, Sultan Ahmed Bin Sulayem, said: “Kazakhstan can use transit revenues and develop new export markets, because when trade grows, we all benefit. We’ve learnt that connecting multi-modal transport, industrial parks, economic zones, ports and terminals through a focus on infrastructure is the way to grow. It’s a model we’ve pioneered at our Jebel Ali Port and Free Zone in Dubai and replicated around the world, including at London Gateway in the UK and Caucedo in the Dominican Republic. The success is measurable – Jebel Ali Port and Free Zone contribute to over 20% of Dubai’s GDP today.

“Technology is changing the way we handle cargo because people want their goods ‘now’ and faster than ever before and those who invest in technologies to enable that today will forge ahead tomorrow. The efficient use of all four modes of transport, supplemented with digital technology will be key in developing future economies. Public private partnerships will also help in the development race and China’s One Belt, One Road initiative is a prime example. We need to also anticipate the growth of smart cities and e-commerce, and how to participate given that many jobs needed for the future do not even exist today.”

DP World has been advising the government of Kazakhstan on its ports, free zones and trade infrastructure since 2013, at the Port of Aktau and the Khorgos Logistics and Industrial Zone, introducing safety, commercial, engineering and operational procedures followed by DP World across its global operations.

In 2017, the global trade enabler signed a Memorandum of Understanding (MoU) with the government of Kazakhstan for the development of a special economic zone (SEZ) in Aktau, further boosting trade and logistics in the country. The same year, two other agreements were signed with the Kazakhstan government and its customs department for the development of a port community system (PCS) to support the Eurasian transcontinental trade corridor. In March 2018, DP World signed two new framework agreements relating to the acquisition, governance and management of SEZs in Aktau and Khorgos.

A 17% increase in the transit of goods was seen through Kazakhstan in 2017 (equivalent to 17 million tonnes), while trans Kazakhstan container trade by rail grew by 46% and Khorgos Gateway container volumes grew 113% in the same year.