The importance of Canada to DP World’s global operations and the global trade enabler’s commitment to the country were a focus of discussions between DP World Group Chairman and CEO Sultan Ahmed Bin Sulayem and Canadian Prime Minister, Justin Trudeau in a bilateral meeting at the World Economic Forum Annual Meeting in Davos, Switzerland this week.
Mr. Bin Sulayem presented an update of the global trade enabler’s activities in all its locations and conveyed the importance of the country in its growth strategy. He underlined DP World’s commitment to Canada and continuing appreciation of the support of the Canadian Government. He also detailed how DP World supports the national economy through its range of operations, community engagement and investment commitments including terminals in Vancouver and Prince Rupert on the west coast and Saint John, New Brunswick on the east. 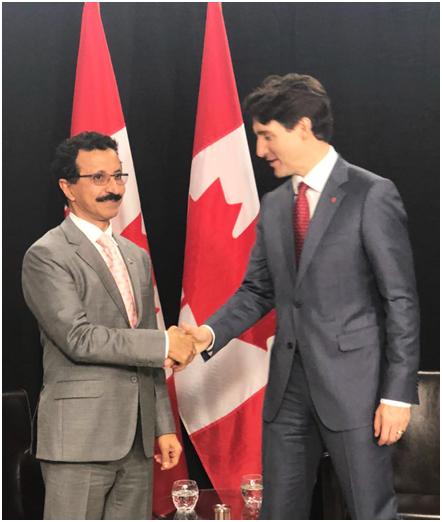 He stressed the employment opportunities and ongoing partnership with First Nation communities as evidence of how DP World works closely with local people. This was particularly evident in Prince Rupert where DP World operates the Fairview Container Terminal. DP World completed the Phase 2 North expansion of Prince Rupert in August 2017 raising capacity to 1.35 million TEU, making it capable of handling the largest vessels afloat. It is an economic engine for the community there and a key asset with 65% of Canadian exports to Asia originating in British Columbia, ideal for the development of export logistics.
Mr. Bin Sulayem underlined the Group’s other commitments, notably the investment vehicle created in 2016 in partnership with Caisse de dépôtet placement du Québec (CDPQ), one of North America’s largest pension fund managers. The investment platform totals US$ 3.7 billion, with DP World holding a 55% share and CDPQ the remaining 45%. The platform exists to invest in ports and terminals globally (excluding the UAE) across the life cycle of the asset, with a focus on investment grade countries.
He also touched on DP World’s growth strategy to develop complementary sectors in the global supply chain such as industrial parks, free zones and logistics to add further value for all its stakeholders. Setting these up across its business and in new locations around the world will be a major focus in the coming year.
DP WorldGroup Chairman and CEO Sultan Ahmed Bin Sulayem said: “This excellent and positive meeting confirmed the important role we are playing as a trade enabler for Canada and for its people, with firm partnerships with local communities and First Nation representatives. We believe that every community we work with is part of the DP World family and we are delighted to have Canadians as family members, enriching our business. The development of Transpacific and Atlantic trade, our global strategy for growth, employment opportunities and supporting local economies over the long term were other areas of discussion.”

“We aim to lead the future of world trade and adopting new ideas that could change the way we do thingsis always part of our thinking. Strengthening our partnerships around the world and being involved in discussions at global platforms like the World Economic Forum are also essential to anticipating change, new trends and our customers’ needs.”