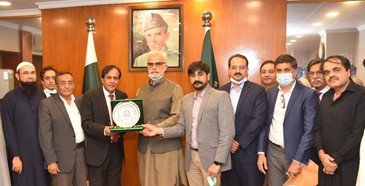 Mian Nasser Hyatt Maggo, President FPCCI, has requested that NAB should facilitate the business, industry and trade community of Pakistan – and, play its due role to create conducive environment for economic growth in the country. Mian Nasser Hyatt Maggo said that DG NAB should take notice of undue cases of any businessman by any official and unfair notices should be withdrawn. He was speaking to a large gathering of prominent business personalities from across Pakistan; in-person & over Zoom on the occasion of Dr. Najaf Quli Mirza, DG NAB Sindh, visit to FPCCI Headquarters in Karachi.

Mr. Nasir Khan, VP FPCCI, mentioned the issues being faced by the business community pertaining to unavailability and speculative profiteering in industrial plots with the help of authorities and that should be looked into to alleviate the concerns of business community.

Mr. Adeel Siddiqui, VP FPCCI, pointed out that there are already too many watchdogs for white-collar crimes like FIA, FBR, SECP, etc; and, these agencies should continue to handle the cases of business community. He also mentioned that, due to the fear of NAB’s prosecution, ease of doing business atmosphere is being seriously disadvantaged in the country as compared to the region and no bureaucrat is ready to take any decisions to avoid any future inquiries. He added that strong, efficient and transparent land conversion system is required in the province of Sindh. He maintained that the business community is ready to face any inquiries based on merit; but, the hearings must be swift and businessmen should not suffer at the hands of lapses and delays at the end of investigative agencies. He also expressed his shock over cancellation of lease licenses in Sindh and demands of bribes to restore them by some corrupt elements in various departments.

DG NAB said that no business entity, whose hands are clean, should be terrorized or withhold their investments and expansion plans for that matter; and, NAB does not divulge into any business’s matters unnecessarily and 90% of the cases pertaining to businesses are being dealt by other investigative agencies. He also listened to the individual concerns and welcomed the aggrieved parties to visit his office for detailed discussions on the matters pending.

DG NAB Sindh apprised the audiences of the remarkable performance of NAB in the past 3 years that has resulted in recovery of approximately 450 billion rupees and that shows that NAB is performing better than other investigative agencies.

FPCCI is looking forward to having more such detailed productive and consultative sessions with NAB to resolve all outstanding issues of the business community; to create awareness and to promote harmony with the governmental institutions.