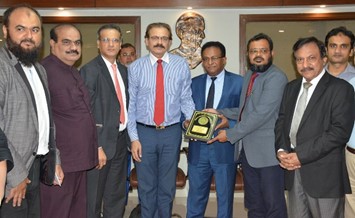 On this occasion, VP KATI Syed Wajid Huassain said that as we are lagging behind in Research and development, this is the basic cause of challenges faced by our industry particularly and economy in general. He urged that there is need to promote research culture especially in the field of Engineering for the prosperity of industrial sector in Pakistan. Zubair Chhaya was of view that everybody know the causes of declining exports, now it is time to take action towards the right direction. Prior to this GM EDB, KB Ali said that promotion of Engineering Value Addition sector should be the priority to increase country’s exports. He said that in global trade engineering value added products has a share of trillions of dollars but our contribution in the sector is negligible. He told that a delegation of EDB have visited major cities to collect information from industrialists regarding export related problems and hurdles faced by them, and to prepare proposals and suggestion to resolve the issues.

Head of KATI’s standing committee on Automobile Ghzanfar Ali Khan briefed the delegation about pertinent issues faced by Automobile sector. He said that as government has decided to promote electric vehicles, to protect local industry manufacturing of 4 essential parts of the technology should be localized. He applauded the committed efforts of government for the enhancement of country’s export. He also informed the delegation that there is need to work on effectiveness of commercial attachés of Pakistan in abroad to strengthen B2B contacts. He suggested that economic affairs should be on the top of our foreign policy and diplomatic missions. KB Ali told that Federal Ministry of Science and Technology is working on proposals of auto spare parts of electric cars and especially on batteries. He also agreed to convey the related suggestions and concerns of industry to Economic Affair Division and Foreign Office. Another member or the delegation, GM EDB Raazia Shahid told the meeting that the board can provide consultation to industry related to cut down their production cost.