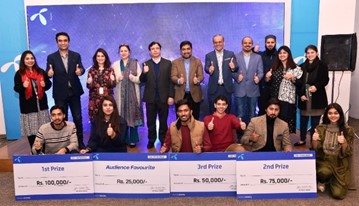 Telenor Pakistan’s corporate accelerator, Velocity, held the closing ceremony of a month-long hackathon ‘Developer’s Game Jam: GameBird Edition’, at its 345 Campus in Islamabad. The hackathon was aimed at enabling an ever-growing community of game designers, developers, artists, and writers to come together on a common platform, to learn new skills and create video games of the future.

This edition of the Game Jam received more than 200 applications. Thirty-eight teams, represented by artists, content writers, developers and gamers participated in the second edition of Game Jam. Fifteen games were submitted to the month-long game designing extravaganza, with Chuk Chuk Rail Gari winning the top prize. Chacha Qinchi Wala and Phaday Baaz finished on second and third position. The winners received cash prizes, and the winning games a chance to be featured on– Pakistan’s first Esports platform, GameBird.

Given the vast, untapped potential of the games industry and the low number of game designers, developers, and artists in the sector in Pakistan, Developer’s Game Jam: GameBird Edition provided a hands-on experience with workshops, mentorship and live feedback sessions to the participants. Some of the workshops included in the jam covered topics such as game ideation, game design fundamentals, game narrative design and production, best practices in designing player journeys and developing games.

Aisha Moriani, Additional Secretary, Ministry of Information Technology and Telecommunication said, “Despite the continuous growth in the gaming industry worldwide, Pakistan falls short in terms of developing a robust infrastructure to support this growing segment, despite having excellent talent potential in game designers and programmers. Events such as these provide a promising opportunity for us to showcase our talent and potential.”

Irfan Wahab Khan, Chief Executive Officer, Telenor Pakistan said, “Pakistan has immense potential, particularly in innovation and talent, as evident from the progress of the local gaming industry. I believe it is our collective responsibility as a society to nurture talent and bring it at par with the rest of the world. This year’s Game Jam once again, offered a glimpse of all that the young people of the country can do if provided with the right platform.”

Game Jam is a hackathon for the gaming industry whereby gamers, game developers, artists, and content writers come together to create new games. The hackathon was a collaboration with Epiphany, a consulting firm that develops and executes game jams, offering young and upcoming game developers/designers, artists, and illustrators to create games and showcase their talent.