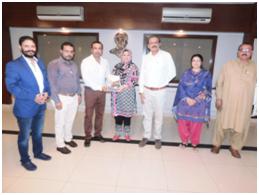 In this meeting planting drive in Koranghi and other civic issues faced by Korangi Industrial Area(KIA) were discussed. President KATI Danish Khan assured full support of KATI for plantation drive in KIA and urged to speed up the campaign all over the city. Chairman & CEO KITE ZubairChhaya said that industries situated in the area were facing double challan issue from KMC and DMC. He also told that incidents of solid waste dumping on roadsides were also come into notice and parking of footpaths becomes a problem in many areas. In this meeting it was agreed that a combine meeting between KATI and representatives of DMC, KMC, Solid waste Management and other administration departments will held on 10th October.