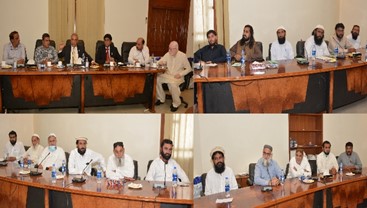 President Karachi Chamber of Commerce & Industry (KCCI) M. Shariq Vohra has assured to take up the exorbitant royalty issue being suffered by dumper truck owners with Sindh Minister for Mines & Minerals Development Mir Shabbir Ali Bijarani by requesting him to restore the previous rates while any increase in royalty must only be implemented after consultation with stakeholders.

The meeting was also attended by Vice President KCCI Shamsul Islam Khan and Managing Committee Members whereas Presidents of the Dumper associations Haji Yousuf and Liaquat along with General Secretaries Jan Alam, Maqsood and Jahanzeb were also present at the meeting.

Shariq Vohra further stated that strike by dumper truck owners was neither in their own favor nor in favor of trade, industry and the economy hence, they should put all their demands aside and immediately call off the strike as soon as the government agrees to restore royalty at the previous level which was agreed by all the participants of the meeting.

Members of the Dumper Truck Owners Association informed that with a fleet of 11,000 dumper trucks, they have been catering to the demands of Karachi and rest of Sindh by lifting the garbage and supplying construction materials not only for development projects but also for all types of projects undertaken by the private sector all over the city and the province, besides paying huge amount of taxes to the national exchequer.

However, the Provincial Department of Mines & Mineral has recently issued a notification in which exorbitant royalty has been imposed and the task to collect royalty has been given to contractors which was unacceptable. This matter was taken up with all relevant authorities but as nobody bothered to pay any attention, it left no other option but to go on strike, they added.

They demanded that royalty cannot be implemented on Dumper Truck Owners hence, it must be immediately withdrawn whereas, dumper trucks are usually set ablaze by the angry mob whenever an accident occurs hence, the damages caused such dumper trucks must be compensated by the government.

Moreover, they further stated that dumper trucks were being intercepted during their journey to demand illegal funds which must also be stopped while proper parking space must also be allotted for the dumper trucks.

They said that dumper truck owners were already facing severe crises due to rising diesel and tyre prices and it was impossible for them to continue their work in such an odd situation in which they were being compelled to pay enhanced royalty which has been increased from Rs8 per ton to Rs40 per ton in addition to heavy toll tax of Rs3200 for one in & out trip which rises to Rs6400 per dumper truck that makes at least two trips in 24 hours.

President Karachi Chamber of Commerce & Industry M. Shariq Vohra presiding over a meeting held at KCCI on Monday to discuss issues being faced by Dumper Truck Owners Association who were led by their Chairman Mian Jaan. Vice President KCCI Shamsul Islam Khan, Presidents of the Dumper Associations Haji Yousuf and Liaquat along with General Secretaries Jan Alam, Maqsood and Jahanzeb were also present at the meeting.