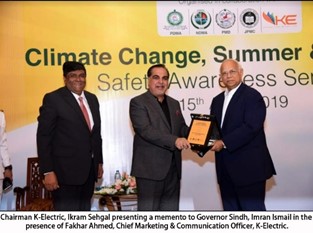 Fighting
climate change is the most important war that we need to fight right now. This was stated by Imran Ismail, Governor Sindh while speaking as the chief guest at the Climate Change, Summer & Monsoon Safety Awareness Seminar organized in Karachi, in collaboration with NDMA, PMD, JPMC and K-Electric.

The governor also said that the focus needs to be on precaution and prevention as peak summer approached. He lauded the initiative by K-Electric to partner with key stake-holders for summer preparedness and appreciated the fact that the awareness drive is on an even bigger scale this time. Ismail also said that Green Pakistan initiative is a part of the government’s efforts to limit the impact of climate change in the country and in Karachi. He appealed to civil society to come forward and become a partner in this initiative by adopting a tree.

The guest of honor at the seminar Lieutenant General Omar Hayat, Chairman NDMA said that Pakistan is one of the most disaster-prone countries in the world. “From 1947 to 2010 we lost USD 19 billion to floods. From 2010 to 2019, we have lost USD 19.5 billion to floods alone.”

“We have faced all kinds of disasters, both natural and man-made and will mostly likely face them again. Our preparedness is better but nowhere close to where we need to be and our urban centers are particularly at risk because of unplanned growth,” he said. “There can never be too much awareness about disasters, and we must make Karachi resilient, to make Pakistan resilient.”

The Pakistan Meteorological Department has always been at the forefront on any initiative related to climate change and Abdur Rasheed, Chief Meteorologist, Karachi highlighted the imminent threat to Pakistan with regards to global warming. He said that Pakistan is ranked 135th in generation of greenhouse gases but 8th in the rank of countries that are at risk from climate change. “This basically means that the people of Pakistan in general, and the citizens of Karachi in particular will have to be more prepared than ever to minimize the impact of environmental degradation on the quality of life and economic growth.”

“Among the most severe threats we face is water shortage. According to the UNDP we can save only 9% of our floodwater and the impact of this will continue to become worse until 2025. Rise in temperature, air pollution and water shortage are the three key issues we will face because of climate change,” Rasheed also said.

Ikram Sehgal, Chairman, K-Electric welcomed the collaboration towards increased and improved summer and monsoon preparedness. He said KE would extend full support to the Provincial Disaster Management Authority (PDMA), Rangers and various NGOs who will be setting up heat protection camps across the city.  He further said that KE would also act as facilitator in first-aid capacity building workshops in Karachi for around 1,000 volunteers in collaboration with The Youth Parliament.

Earlier, Fakhar Ahmed, Chief Marketing and Communication Officer of KE spoke about the power utility’s summer preparedness through the strengthening of its network and system and by beefing up the on-ground work force through capacity building and technological advancement. He expressed the hope that the presence of key stakeholders under one roof would result in better inter-agency coordination and help in providing effective support to combat the impact of climate change.

Iftikhar Shalwani, Commissioner Karachi; Dr. Seemi Jamali, Executive Director, JPMC; Amir Zafar, Chief HSEQ, KE and Azmat Hayat, Additional DG, PMD also spoke on the occasion and briefed the participants about the threats from climate change and preventive and protective measures to take in the peak summer months. The speakers also highlighted the collective role of civic and government bodies as well as the citizens of Karachi to not just highlight and report cases of power theft but to also conserve electricity consumption during peak hours.