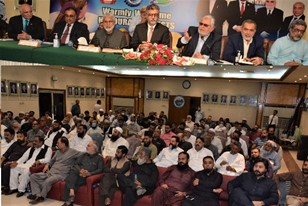 Chairman Businessmen Group (BMG) & Former President Karachi Chamber of Commerce & Industry (KCCI) Zubair Motiwala has urged all shopkeepers and small traders to exhibit complete unity and solidarity under KCCI’s umbrella so that one strong voice could be raised to compel the federal and provincial governments to pay attention to Karachi and immediately resolve all the issues being suffered by Karachiites.

“The Karachi Chamber, being the premier Chamber and a true representative of the entire business community, is not just for resolving problems of businessmen and industrialists but small traders and shopkeepers are also equally important and dear to us hence, BMG Leadership and KCCI Office Bearers are always available to help out small traders and shopkeepers who are an integral part of this Chamber”, he added while speaking at the first meeting of Special Committee for Small Traders which was also attended by Vice Chairman BMG Jawed Bilwani, President KCCI Muhammad Idrees, Senior Vice President Abdul Rehman Naqi, Chairman of KCCI’s Special Committee for Small Traders Majeed Memon, Former Presidents KCCI Majyd Aziz & Younus Muhammad Bashir, Former Senior Vice President Talat Mehmood, KCCI Managing Committee Members and a large number of shopkeepers and representatives of commercial markets’ associations.

Commenting on the hardships being suffered by shopkeepers due to outbreak of COVID-19 pandemic and the subsequent lockdowns, Chairman BMG urged the Federal and Provincial Governments to provide a helping hand to the perturbed small traders and shopkeepers who were still distressed and have not come out of crises because of the severe losses suffered during lockdowns. He said that the Karachi Chamber was struggling really hard to some how convince the government to extend financial support to shopkeepers as compensation for the losses suffered by them during COVID-19 pandemic.

Responding to concerns expressed by meeting participants over poor attitude of police officers towards shopkeepers, Zubair Motiwala assured that the Karachi Chamber was well aware of this particular issue hence it has already been discussed with Karachi Police Chief Imran Yaqub Minhas who assured to deal with it at the earliest so that the small traders and shopkeepers could carry out their business activities without any kind of fear from police.

He also promised to invite Additional IG for a meeting again at KCCI in which small traders and shopkeepers will also be invited so that they could directly discuss issues pertaining to parking, police patrolling, encroachment, thefts, robberies, mobile snatching and other heinous crimes taking place in their areas. “We will keep striving and continue to raise a very strong voice until all the issues are resolved exactly as per aspiration of small traders.

Commenting on problems being faced by small traders and shopkeepers due to complete closure of businesses on Sunday which has been earmarked as Safe Day, Chairman BMG informed that this issue has been taken up with Chief Minister Sindh Syed Murad Ali Shah who has assured that if the NCOC declares Sunday as working day for shopkeepers, he would immediately lift the restriction of carrying out business activities on Sundays. “Chief Minister will also be visiting KCCI next week where we will again highlight this issue so that it could be taken into consideration”, he added.

He further informed that KCCI has also taken up the issue of forced registration with Chairman Sindh Revenue Board (SRB) Khalid Mehmood who was advised to hold consultation with relevant markets’ associations instead of forcing the shopkeepers to get registered. “Any misconduct or demand for bribe by SRB official may please be reported to KCCI and we will take up this matter with SRB to ensure that no injustice was being done to anyone”, he added.

Keeping in view the hardships being faced by Shopkeepers in obtaining trade license, Zubair Motiwala assured to develop some kind of system within KCCI so that the shopkeepers could get the trade license without any demand for bribe by just paying the fee. “We will also take up the possession issue being suffered by displaced shopkeepers of the encroachment drive who although have been allotted shops at alternate locations but the possession has not been given so far”, he added.