Skip to content
Home » CEO from Private Sector will be appointed in Water Board, Chief Secretary Sindh 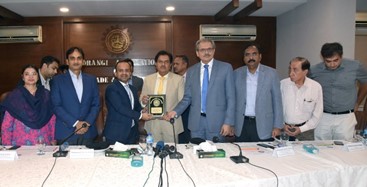 There will now be a CEO from Private Sector appointed at Karachi Water and Sewerage Board (KW&SB). The Water Board is an old institution that needed a lot of reform. According to a World Bank study, the institution needs immediate reform. These views were expressed by Chief Secretary Sindh Syed Mumtaz Ali Shah while addressing a luncheon held at Korangi Association of Trade and Industry (KATI).

Chief Secretary Sindh Mumtaz Ali Shah further said that World Bank has conducted a study on Karachi which said that improvement in infrastructure of Karachi should be the first priority. The World Bank has suggested a 10 billion US Dollars investment in the city’s infrastructure. He said that the role of KATI is the most important in all the industrial areas of the country.

Mumtaz Ali Shah said that when I took over as Chief Secretary three and a half years ago, SM Muneer was the first person to invite me to KATI. He further said that I pay tribute to the business community in Karachi for running the industry in such dire straits.

Mumtaz Ali Shah said that work on mass transit in Karachi is in full swing, as the transport sector in Karachi is of utmost importance. In this regard, work is underway on six routes of BRT out of which Green Line Bus has been launched. Meanwhile, work is also underway on Karachi Circular Railway (KCR) on priority basis. He said that no one can deny the importance of Karachi in Pakistan’s economy, if Karachi develops then Pakistan will develop. That is why the federal and provincial governments are taking all possible steps for the betterment and rehabilitation of Karachi.

Earlier, KATI President Salman Aslam welcomed Chief Secretary Sindh Syed Mumtaz Ali Shah on his arrival in KATI. He said that it was an honor for Mumtaz Ali Shah to serve in Sindh which is of historical significance. We appreciate the services of the Chief Secretary as he has taken commendable steps during his tenure to improve the administrative affairs in the province.

President KATI said that Chief Secretary Sindh was fortunate that he was given maximum support by all concerned stakeholders, people, industrialists and other officials which enabled him to discharge his responsibilities in the province in an efficient manner.

Salman Aslam said that Mumtaz Ali Shah has always taken great strides for the problems of Korangi Industrial Area and now that his tenure is coming to an end we pay tribute to him for always giving priority to the industry.

Zubair Chhaya said that garbage disposal is the biggest problem in Korangi. Garbage is being brought from District East and dumped here which is not being implemented despite repeated complaints. He requested the Chief Secretary Sindh to help Katie on this issue.

Zubair Chhaya further said that the water board in Karachi has deteriorated, especially in the Korangi industrial area, there are serious concerns over the performance of the water board. He said that this department could not recover unless revolutionary measures were taken in the Water Board. He said that corruption was rampant in the organization while the staff was patronizing the tanker mafia. The Korangi industrial area is rife with water and sewerage problems, which officials have turned a blind eye to.