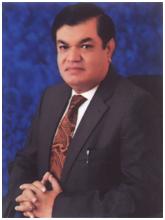 The government should take immediate steps to arrest the trend lest it becomes a political issue with a heavy price, he warned.

Talking to the business community, the veteran business leader said that the country had 27.9 million tonnes of wheat stocks at the beginning of this year while the requirement was 25.8 million tonnes.

Despite sufficient stocks the rumours and stock position in the province of Sindh played its role in providing an opportunity to the middlemen to exploit the consumers, he added.

The former minister noted that the government should immediately allow duty-free import of wheat to stabilize prices in the market otherwise the prices may rise further creating problems.

He said that resolving the issue of wheat shortage on sustainable basis require steps like provision of water to the farmers, provision of affordable inputs, and tackling corruption in this sector and controlling smuggling.

The veteran business leader noted that rumours of missing of two hundred thousand tonnes of wheat from godown in Sindh has added fuel to the fire.

He said that middlemen are buying wheat from farmers at throwaway prices and selling it on exorbitant rates exploiting growers and masses which should be noticed.

He said that the undocumented sector of middlemen should be documented and they should be kept under vigilance so that they cannot play with the national security.