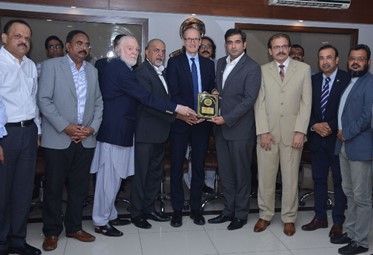 Mr. Nithavrianakis said that with improved security situation in Pakistan and particularly in Karachi, international perception of the country has improved enormously. He also cited that international rating of Pakistan regarding ease of doing business has improved which is a positive sign. He said that British companies in Pakistan have been performing trumendously and on many certain occasions they even get more profit from the country as compare to the region. He said that United Kingdom wants to expend its trade and economic relations with Pakistan and there is need for a comprehensive strategy for this task. He said that declining exports have been the biggest challenge to Pakistani economy. He highlighted that discouraging imports balance and enhancement in bilateral trade should be considered in policy initiatives.

On this occasion, President KATI Sheikh Umer Rehan briefed the British envoy regarding economic significance and production capabilities of Karachi Industrial Area. He said that there are a lot of opportunities for bringing bilateral relations of both countries on higher levels. He said that SMEs were producing 60 t0 70 pc of Pakistan’s exports but now this share has reduced to 20-30 pc. Senator Abdul Haseeb Khan urged to expend B2B relations between both countries. Masood Naqi was of view that there is a lot of fertile venues for British investors in Pakistan especially in Services, Agriculture, Tourism and other sectors. He suggested seeking assistance from that Commonwealth for strengthening economic ties between UK and Pakistan. While responding to the queries of participants of the meeting British envoy said that Commonwealth Development Corporation (CDC) can play an important role in the development of Pakistan however it would need to bring with comprehensive ideas for development. Both sides also agreed for further deliberations to enhance trade ties of both countries and sharing of suggestions.