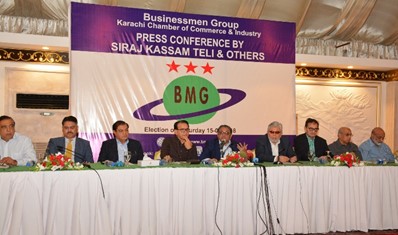 Chairman Businessmen Group & Former President Karachi Chamber Commerce and Industry (KCCI) Siraj Kassam Teli has said that all 15 candidates of Businessmen Group (BMG) will win KCCI Annual Election 2018-19 with huge margins and the opposition will face forfeiture of their security deposits as majority of the business and industrial community has extended overwhelming support to BMG.

“BMG, which since its inception in 1998, has been effectively governing KCCI under the policy of ‘Public Service’ and has transformed this Chamber from a financially strained institution to a self-sustainable, stable and stronger organization”, he added while addressing a press conference in a local hotel on Monday.

Siraj Teli pointed out that Leader of United Businessmen Group (UBG) of FPCCI S.M. Muneer, who initially extended support to BMG, recently made a U-turn and announced to support BMG’s opponent Group led by AKD and Maqsood Ismail. However, this U-turn was undoubtedly, a ‘blessing in disguise’ as it went in our favor by encouraging many others to come forward to support BMG, its leadership and candidates who never make such U-turns and do exactly what they say or commit in all types of circumstances.

Highlighting the overall strength and support being enjoyed Businessmen Group, he said that many trade associations, industrial town associations, commercial markets’ Associations, hundreds of small traders, leading businessmen and industrialists have extended wholehearted support to BMG in the forthcoming elections and they are being requested once again to make sure they come to cast their votes and be counted. In this regard, a noteworthy development recently took place when Businessmen Panel (BMP), which opposes UBG in FPCCI and is being led by Mian Anjum Nisar from Lahore, also announced unconditional support to BMG. The support was declared by BMP Karachi representatives Mian Zahid Hussain, Zakria Usman, Shaukat Ahmed, Nasir Hayat Magoo and 20 other leading businessmen who arrived at a dinner reception last Saturday night to announce the unconditional support to BMG in KCCI’s Elections.

“We warmly welcome the support extended by prominent figures from this group, who understand Karachi’s business politics as well as the work done by BMG. They can see who is right and who is wrong”, he added while further appreciating the support extended by President Karachi Electronic Dealers Association Rizwan Irfan, Nasir Turk, Saleem Memon and other notables from the Electronic Market, Paper Market and other important markets across the city.

Siraj Teli further commented that the opponents and their supporters were making attempts to damage the business environment which was not something new for BMG as all these people, who have extended support to our opponents from AKD, had made similar attempts in KCCI’s elections in 2001 and 2004 in which they faced terrible defeat which they will again face in 2018 Elections thanks to the overwhelming support extended to BMG by majority of business and industrial community.

While rejecting the misleading, false and baseless allegations leveled against him by the opponents and their supporters, Siraj Teli said, “It was unfortunate that numerous negative remarks were given and those bad words were used about me which I don’t feel appropriate to respond. If they have any personal enmity with me then instead of supporting candidates from behind, they should come in front and contest directly.”

Referring to opponent party’s misleading ‘Change’ slogan, he said, “What change do they want to see at KCCI which is an institution where modern technologies have been introduced and excellent work was being carried out by the Research & Development Department, Media Department and all other departments which cannot be compared with any other Chamber of the country. Moreover, the opposition cannot prove corruption of a single rupee either by Siraj Teli or by any other BMGIAN during the last 20 years.

“The term Tabdeeli (Change) was introduced by Imran Khan against the corruption of PML-N government, it simply cannot be misused for winning KCCI’s election where everything is going on perfectly well and all operations are being carried out in a transparent manner. After losing in national politics, these elements were using the same tactics of allegations in KCCI’s elections which won’t work and the business and industrial community would straightaway reject all of them”, Siraj Teli said, “In my opinion, they just don’t like my face and want to change it and that’s it, which will not be acceptable to the entire business and industrial community as they all are well aware of my non-stop contribution for the well-being of business community.”

Chairman BMG further stated that BMG’s matchless contribution from KCCI’s platform cannot be explained through words however he mentioned some major achievements including KCCI’s quest to urge the government to include revenue generation in NFC Awards during Shaukat Aziz’s tenure as Prime Minister, KCCI’s vibrant role played in response to Boulton Market and Timber Market tragedies, relief activities carried out during several years for the victims of natural calamities, struggle for restoration of peace in Karachi, KCCI’s key role in convincing all political parties and Law Enforcing Agencies to give go ahead to Karachi Operation in 2013, commencement of construction work of KCCI’s new Building in Clifton, consistent criticism by KCCI over anti-business polices and many other initiatives by the Chamber which were purely taken for the wellbeing of business community. During all these years, BMGIANs vocally raised voice for resolving numerous economic issues and actively intervened in every single matter affecting this city and its business and industrial community, he added.

He stated that it was solely due to strong voice raised by Karachi Chamber that led to commencement of Karachi Operation in 2013 as not a single trade body or FPCCI raised their voice against rising lawlessness as vocally as Karachi Chamber did. All these and many other achievements achieved by KCCI during the last 20 years can be confirmed by reviewing the records in print and electronic media and the same are highlighted in the booklet being provided today.

He said that BMG since its inception in 1998 has been constantly winning KCCI’s election without losing a single seat whereas the elections held during the last 11 years were won unopposed by BMGIANs. “We came to contest in KCCI Elections in 1998 after seeing many incorrect policies being followed at the Chamber which was the sole reason behind the formation of BMG. There never was, never is and never will be any personal enmity with anyone”, he added.

Siraj Teli said that BMGIANs dedicate a lot of precious time of their lives to Karachi Chamber and never spent any funds from KCCI’s financial resources, besides sincerely serving Karachiites since day one under the clear policy of “Public Service”. In this regard, he mentioned that under BMG’s policy of Public Service, not only the business community but also all the citizens of Karachi are fully assisted without any discrimination of cast, color or creed. “We ensure equal participation of all communities in KCCI’s Affairs and the same can be gauged from the fact that not a single community inhabiting in the multicultural and multiethnic society of Karachi can claim of any injustice done with them during the last 20 years”, he added.