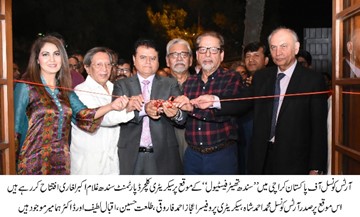 17 days Sindh Theater Festival is going to be held at Art Council of Pakistan Karachi with the coordination of Sindh Culture department and it will last till November 18th. Everyday different plays of Urdu and Sindhi will be performed at the Arts Council Karachi. At the first day of Festival an Urdu Language play entitled “Ullu and Mano” performed at the Arts Council Auditorium. The Play was directed by Anjum Ayyaz and it was reflecting the common issues to a single man and women in the society who are living alone and the contradiction of gender while living together.