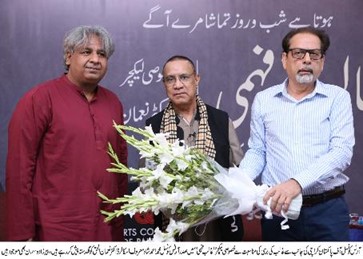 “Ghalib was the greatest prose writer of his time who was great at humour; also, his tricks were amazing. It is said that every poet rebels, but Ghalib rebelled against rebellion, Ghalib is not so easy to understand, just as Shakespeare is difficult to understand, so is Ghalib” renowned scholar Dr Noman-ul-Haq expressed these views in a special lecture “Ghalib Fahmi” organized by the Karachi Arts Council on the occasion of the death anniversary of Mirza Asadullah Khan Ghalib.

Eminent academic and literary personalities attended the special lecture. President Arts Council Muhammad Ahmad Shah thanked the audience and said that on Ghalib’s death anniversary, he thought of doing something to commemorate Ghalib and freshen up his memories. He did not dare to disobey Ghalib’s mandate, so he invited Dr Noman-ul-Haq for a special lecture. He added that I am grateful to Karachi Arts Council’s governing body for celebrating Ghalib’s death anniversary.