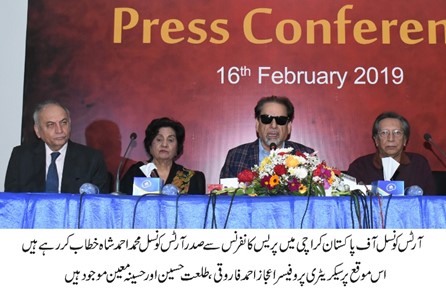 President Arts Council of Pakistan Muhammad Ahmed Shah has said that the behavior of Indian Poet and Writer Javed Akhtar about Pakistan is condemnable where the last lines of Shabana Azmi’s tweet regret us. “We believe that from Ameer Khusroo to Sahir Ludhianvi and Tegor, our tradition is common but the Indian Civil society and philosopher apart from this mission under the pressure of extremists, we didn’t cancel the Kefi Azmi conference at Arts Council of Pakistan but their denial canceled the conference”.

On such occasions, if Javed Akhtar and Shabana Azmi had great pressure, they should keep quiet, but such behavior of Javed Akhtar and Shabana Azmi regret the people who want to connect people on peace and culture. He was addressing to a press conference at Arts Council of Pakistan Karachi along with writer and philosopher Haseena Moeen, Talat Hussain and secretary Arts Council of Pakistan Karachi Ejaz Farooqui.

He said that we didn’t want to do this press conference but what is happening in India for the last two days have to answer in this way. He said that if some people are extremists then does it mean the whole nation is terrorist? But if someone believes in this way he should be answered and condemned. He said that we faced the blast, our people died but we didn’t talk about it, we never responded to the genocides in Gujrat, because we believe that terrorism is an individual act. Ahmed Shah said that extremist has never won a single election in Pakistan but in India Extremism has covered the whole nation and now they are in the power, we never talked about Muslims there, neither about the low caste Hindus and Christens. In the current situation, they don’t have any report about it, a young Kashmiri boy did that who was humiliated by Indian Army some years back and he left home some months back.

In Kashmir they have been killed hundred thousand people and it still continues but they never talked about it, they regret us as like Pakistan they have to talk about the Modi, he further added. He said that we condemn the statement of Javed Akhtar and Shabana Azmi also regrets us, they belong to a great family and we respect them but Shabana should not lose hope of cultural and peaceful relations. Hastens Moeen Said that India has never accepted Pakistan from its birth to today. Culture, poetry, and literature have no boundaries but today they created the boundaries. We have been worked together. Talat Hussain said that it is painful for me that humanity will be lost like this, and extremist will force people to this so they will lie, when Pakistan came into existence they were killing people and so they are doing it till today.