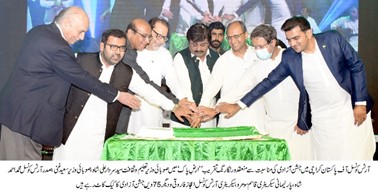 Speaking at the ceremony, well-known writer and intellectual Anwar Maqsood said that today is the seventy-fifth anniversary of Pakistan, and independence is a blessing. Seventy-five years is a long time to develop; he said that the work Ahmed Shah has done for the Arts Council is commendable; I told Shah Sahib that they should be celebrating an evening for My Bhagai, for Sachal Sar Mast, I Wrote ponay 14th August, wrote sawa 14 August and now wrote sadhay 14 August, 14 August is not written because I am waiting for it. Where the Arts Council is today is a gift of love from the Sindh government. He said this is the only country whose fate is not good; the coming year in this country is getting worse than the last. We accept everything from our side; the government cannot do anything alone, the people are the greatest power in the world, and the government will be able to do anything only if the people are with the government.

Pakistan was created by the resolution of 1940. We will not be strong until the provinces are not independent, today, we have to think about how many of the Quaid-e- Azam dreams have been fulfilled and how many have not been fulfilled; provincial minister Saeed Ghani said today have gathered here to celebrate independence day. Education and Culture Minister Syed Sardar Ali Shah said that today had reached here after travelling for seventy-five years, along with celebrating, it is also a day of reflection and a moment of reflection.