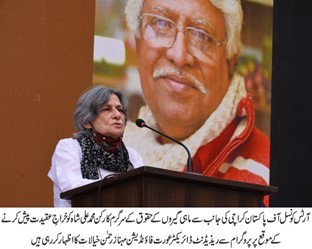 Social activist Faisal Edhi, Mehran Shah, Nasir Mansoor, Gul Hassan Kalmati, Yasmeen Shah, Mehnaz Rehman, Abdul Khaliq Junejo, Dr Ali Arsalan, Fatima Majeed, Nuzhat, and Karamat Ali expressed their views on the occasion. Addressing the event, Faisal Edhi said I am saddened over the death of Muhammad Ali Shah. He left us too soon. The way he worked for the Fishermen community will never be forgotten. The Fishermen community is the oldest, but their problems are the same. The government should pay attention to this.

Mehnaz Rehman, resident director of Aurat Foundation and a women’s rights activist, said that Mr. Shah has always fought for the rights of fishermen, his wife also accompanied him, and their name will always be in history. “It should be the duty of our new generation to carry out their mission,” she said. Gul Hassan Kalmati told that my relationship with Muhammad Ali Shah was ancient; he preferred his work despite differences. He took the Fisher Folk Forum to new heights and stood firm.

There is no precedent for what Mr. and Mrs. Mohammad Ali Shah did together for the fishermen community. We are still struggling for the women’s rights of the Fisher Folk Forum,” said Nuzhat.

Daughter of M.Ali Shah Yasmeen Shah was also present on occasion; she said it’s challenging to speak about my parents. She told my mother decided to get out of the house after my father went to jail during the struggle for fishers. The way my mother supported my father in this movement is unparalleled and I am proud to be their daughter; I appreciate her work and mission and will continue to do so.

“The movement he created has now become a challenge for us; we have to unite collectively so that we be able to work better,” said Nasir Mansoor, Secretary-General of the National Trade Union Federation

Son of M.Ali Shah, Mehran Shah, in his concluding remarks, thanked the Arts Council Karachi, civil society, and fishermen community. He said that it is a great pleasure to hear about the struggle of my father for the rights of the fisherman community. Including Dr. Ali Arsalan, Fatima Majeed, Abdul Khaliq Junejo, Karamat and others also addressed the gathering.