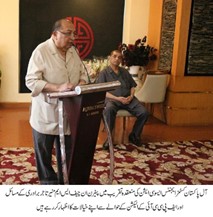 The All Pakistan Customs Agents Association North Zone organized a function in Lahore to honour the country’s leading business personalities and central leaders of the United Business Group to discuss the country’s conditions and business difficulties. At the reception, Senior Vice Chairman APCAA, Arshad Jamal thanked all the distinguished guests and said that at present, the country has gone through a very difficult period and especially the business situation is extremely difficult.

Chairman APCAA Amjad Chaudhry said in his address that customs agents belong to the country’s largest service sector and provide services to the government and trade and industry round the clock of the year. They said that the United Business Group is a real group of business, community and its leadership is sincere to Pakistan and to the businessmen. The All Pakistan Customs Agents Association is part of it and will play its role in the election of the foundation so that real representatives can be elected.

Speaking on occasion, Patron Chief UBG, SM Munir said “Customs agents are an important part of us,” he said, adding that Arshad Jamal was appointed Vice President – United Business Group and announced that Arshad Jamal’s services to Pakistan’s business the community were valuable and that his appointment as Vice President would further strengthen UBG.

Iftikhar Ali Malik Chairman UBG expressed concern over business conditions and he said that the whole nation would have to unite with regard to the whole of The Lord, and this epidemic would have to be exposed. He said that customs agents play a key role in the business community and tax system of this country.