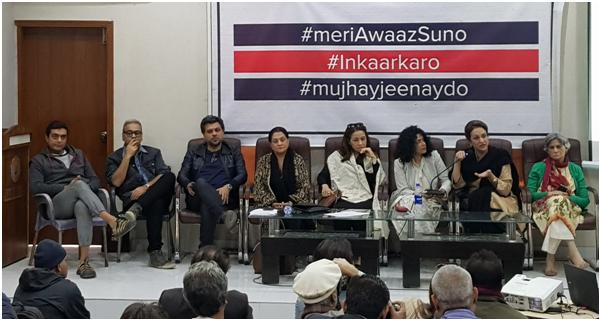 A press conference was held yesterday at Karachi Press Club to launch a campaign against child abuse initiated by actor/producer Angeline Malik to help create awareness against this evil in our society. The event was marked by the screening of promos in Urdu and English of a short film produced by Malik, on the subject.

Video shout-outs by various celebrities who spoke against the cause and also offered solutions to tackle the problem were also shown at the conference. Among those who had recorded their messages were Ushna Shah, HinaBayat, Saman Ansari, Samina Ahmed, Bushra Ansari, Ahmed Ali Butt, Alyy Khan, SarwatGillani, SamiyaMumtaz, Rasikh Ismail, Salma Hasan, Suzain Fatima and Nida Yasir. A number of celebrities were also present in person to raise their voices against this issue and to show solidarity for the cause. Among notable attendees and those who spoke on the occasion other than Malik were Samina Ahmed,Bushra Ansari, ZebaBakhtiar, Ally Khan, Faraz Khan (Advisory board member of Muhafiz) and MehnazRehman (Auraat Foundation),who strongly advocated that it was everyone’s responsibility to stop child abuse.

Child abuse is one of the most ignored issues in Pakistan despite its crippling effects. The number of reported cases has been increasing annually which is why there is a dire need to take on this issue at a national level, and come up with workable solutions.