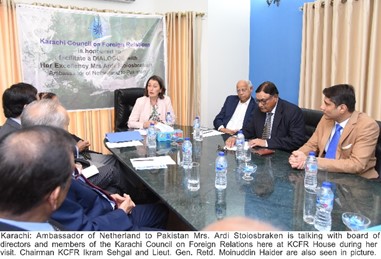 Netherlands Ambassador to Pakistan, Mrs. Ardi Stoiosbraken conveyed her disgust at the terrorist activity in New Zealand and sympathized with the affectees. She said this during her meeting with the Chairman and members of Karachi Council on Foreign Relations (KCFR). She said that, ‘we have religious freedom in the Netherlands and we safeguarded the human rights and supported it for all over the world.

She arrived at KCFR House where she was received by Chairman KCFR Ikram Sehgal, CEO Commodore Retd. (SI.M) Sadeed A. Malik and she addressed council’s Board of Directors with Lt. Gen. Retd. Moinuddin Haider, Vice Admiral (R) Khalid Mir, Saifuddin Zoomkawala, Ambassador Mustufa Kamal Kazi, Treasurer Kalim Farooqui and other members of Board of Directors were also present.

During her address, she discussed the subject of International diplomacy, investment and cooperation between various countries of the world especially with Netherland.

She said that ‘In Holland there is complete religious tolerance and freedom of expression in her country and there are rules and regulations covering this freedom.’

In reply to a question, she said Pakistan is one of those countries which are maximum affected by climate change and to overcome this climate change effects, Pakistan will have to put it on priority and it should be a part of overall planning in Pakistan.

Mrs. Ardi Stoiosbraken also said that there’s great chance of cooperation between Netherlands and Pakistan in the fields of energy, trade and services.

She was given a presentation by CEO Sadeed A. Malik.

Council Chairman Ikram Sehgal informed her that infrastructure in Pakistan was greatly improving and CPEC had opened up new fields in this respect.

The Ambassador wrote down her comments in the Visitor’s Book and at the end Chairman KCFR presented KCFR’s shield to her.