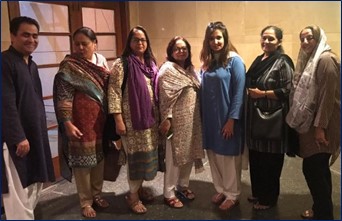 The play was attended by well-wishers of the organisation wishing to support the noble cause, and the media.

TRC took the initiative by inviting around 200 under privileged children and made their day memorable by bringing them to Karachi Arts council at the performance of nostalgic play we all love ALI BABA CHALIS CHOR.

The famous childhood bedtime story of Ali Baba Chalis Chor, has this time been adapted by Umair Rafiq into an enthralling musical. The fabulous performance by the cast Muneeb Baig as Ali Baba, Shabana Hassan as Marjina, Faraz Ali as Babloo Al Bubblegum, Aqeel Ahmed as Qasim, Sehrish Qadir as Bhabhi, executed in association with BlackBox Productions and collaboration with Green Eye Production, directed by Umair Rafiq took the audience on an adventure.

The Teachers’ Resource Centre (TRC) is a non-profit, non-government organization, established in 1986. A group of educationists formed TRC as a response to the declining standards of education in both government and private sector schools. TRC is registered under the Societies Act XXI of 1860, and are tax exempted under section 47 (i) (d) of the income tax rules. An elected Governing Body representing schools that use our services manages TRC.

TRC views the learning process as one that involves far more than the simple transfer of information. Education is a process that requires an understanding of concepts, the acquisition of skills and the development of thinking and reasoning, communication and problem-solving skills. ‘Real’ learning takes place in secure, non-threatening environments, where respect for self and for others is fostered. Another integral part of TRC’s professional and intellectual ethos is environmental education, which we actively incorporate into all of our activities.

Umair Rafiq – Director of the play:

Umair Rafiq is a NAPA graduate of 2017 in Art & Theatre major in acting. He had acted in various plays under the direction of legendary Zia Mohiuddin in Habib Mamoo, Anjum Ayaz in Kisa Sotey Jagtey and with Sunil Shakar in Khamosh Yeh Adalat Hai and Twelve Angry Men. For fresher Taha Khan in Izhare Ishq, Hassan Raza in Juloos, Shamail Taj in Burqa Vaganza and with Zarqa Naz in Heer Ranjha as Ranjha. He has acted in famous drama serial Teri Meri Kahani for HumTv as a supporting role. He has also acted for ATV, GEO and ARY. Presently, he is also working on a film project.