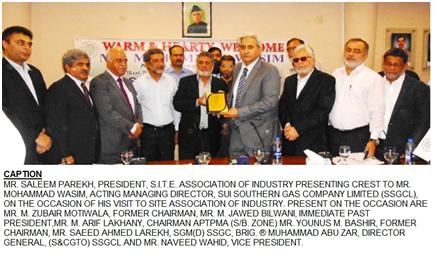 Acting Managing Director of Sui Southern Gas Company Limited Mohammad Wasim has said that by end of March, gas supply to industries is likely to improve due to improvement in gas supply. He was addressing members of SITE Association of Industry on the occasion of his visit. He was accompanied by other high officials of his department.

Members briefed the AMD SSGC on their issues to which, AMD SSGC assured them to resolve on priority.

Mr. Wasim said that closing down of gas supply to industries on Sundays is the last option for SSGC. In case SSGC doesn’t close gas supply to industries on Sundays, industries will face problem throughout the week. For the purpose of supplying gas in required pressure, gas lines are being checked simultaneously with gas load checking of industries. This will be done in coordination & consultation of SITE Association and in this regard, SSGC requests SITE Association to nominate its Focal Person.

Mr. Wasim directed his team to resolve issues of Members of the Association on priority and give proper timeframe for their resolution. Replying to a query about excessive billing, he assured the Members to review all such bills issued.

Speaking on the occasion, Patron-in-Chief Siraj Kassam Teli said that our system will not improve until & unless all politicians & bureaucrats mend their ways. Beside he stressed the business community to speak truth and stand with truth always which is the only way to get their issues resolved. He said that non-stop working of industries throughout the week is the only way to boost exports which is a must for country’s development. Therefore, SSGC should ensure uninterrupted gas supply to industries. Referring to Article-158 of the Constitution of Pakistan,  he said that gas producing province shall have precedence over other parts of the country but unfortunately, it is not being done in the case of Sindh province. Sindh must be given its due share in gas as per constitution.

Earlier, welcoming the guests, President of the Association of Saleem Parekh said that SSGC is making it difficult for the industrialists to run their factories on the pretext of gas shortage. Earlier, industries were facing low gas pressure issue but now if someone runs his factory on Sunday, he is charged with ‘gas theft’ notice. Resultantly, members of the Association are reluctant to approach SSGC.

He demanded to allow SITE Industries to run on Sundays as it is essential for timely completion of export orders. Currently, production process in SITE industries has come to a halt whereas in other industrial areas of Karachi, the industrial process continues unabated. Negative message is being communicated about SITE area among foreign buyers whereas it seems that some elements do not want SITE industries to run or get export orders. He said that in the month of January, exporting industries expect new orders but approx. 295 working hours were lost in January which resulted in huge losses for them. For summer orders, the industrialists are undecided over acceptance of export orders as they are still unclear about gas supply in summer. Mr.Parekh also requested AMD SSGC to take notice of harassment of industrialists in the name of gas load checking.

Patron of SITE Association Mr.Zubair Motiwala, speaking on the occasion and said that Karachi contributes 52pc of country’s total exports therefore, it deserves its due share & right in resources. He informed AMD SSGC that five zero-rated sectors are also not getting proper gas and added that industries should run to put country on the track of development.

Former President of SITE Mr.Jawed Bilwani also spoke on the occasion and said that residential consumers are being provided with new gas connections while industries are being offered RLNG connections. Industries pay huge bills and provide jobs to masses. By running industries on Sundays, industrial production will grow by approx. 14pc which will definitely boost exports but apparently it seems that we are not interested in boosting of exports.

Former President of SITE Younus Bashir mentioned that in other industrial areas of Karachi, industries are running smoothly whereas in SITE Area due to gas shortage, industries hardly manage to run on 20-22 days. As such, the government should take measures to ensure hurdle-free production process.