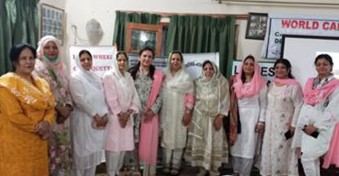 A month-long breast cancer awareness campaign — initiated by RINSTRA.com, Pakistan’s first on-line app created by Pakistanis with only Pakistani content — which took off on October 1 with a webinar on Rinstra’s facebook page, saw the screening of Abhi Nahi in a college and ladies’ club in Quetta. Written and produced by the late iconic Haseena Moin, who herself was a cancer warrior, this was her last play before she passed away.

The screening took place recently at Girls College, Quetta and Ladies Pardah Club. Around 500 students and 100 ladies witnessed the show at the two venues respectively. Students and teachers from HELI were also invited to the event. The latter showing was attended by organizations such as Quetta Chiltan Lions Club, Inner Wheel Club seniors and juniors, TIBM, Business and Professional Women to show their support towards the campaign. An awareness speech was presented by Dr Uzma Sohail, who herself is a cancer warrior. As a gesture to show support towards the survivors badges, pink ribbons, and flyers were also distributed which were sponsored by Inner Wheel Club.

As part of the campaign, “Abhi Nahi” will continue to be screened in different cities and institutes of Pakistan. The series is also available on RINSTRA’s website: https://rinstra.com/

Come forward and share your story by uploading a video or wearing a pink ribbon using the hashtag #rinstrabreatcancerawareness on social media and get a chance to get featured on RINSTRA’s website and social media platforms.