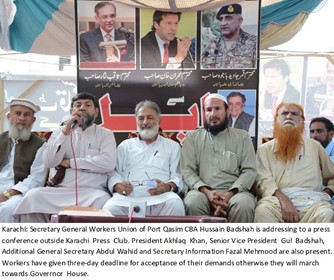 Protesting dock workers of Port Qasim at Karachi Press Club, have given three-day deadline to federal ministry of port & shipping to accept their demands, after which their kids will hold demo and they will start marching towards Sindh governor house. This was announced by leaders of Workers Union of Port Qasim CBA while addressing to a press conference called by them at their sit-in camp in front of Karachi Press Club today.

We are giving deadline till Thursday to Chinese company and officials of ministry of port and shipping to accept our demands. Kids of labourers in hundreds will hold demonstration at Karachi Press Club and next day on Friday, we all will start marching towards Sindh governor house if our demands are not met, they warned.

We are here at sit-in for last 35 days and no one is serious to solve our issues. Our kids are out of school since many months while each family is starving due to non-payment of salaries for four months. Identity cards of port workers should be issued without any further delay and Dock Workers Act 1974 be implemented in letter in spirit at Port Qasim too, they demanded.