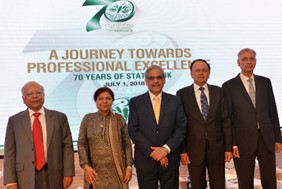 State Bank of Pakistan (SBP) celebrated its 70 years’ anniversary on Sunday July 1, 2018 with a number of programs taking place simultaneously at the Bank in Karachi. These activities were aimed sharing the 70 years’ history of SBP and bridging the information gap on various functions and achievements of SBP and its subsidiaries.

The programs were attended by a cross section of society, particularly school children.

The Bank organized an insightful panel discussion on this historical occasion covering a wide variety of topics including macroeconomic management, SBPs conduct of monetary policy and role in promotion of credit extension to priority areas and use of digital innovations and technology in providing banking services. In this discussion current as well as previous SBP governors including Governor SBP Mr. Tariq Bajwa, Finance Minister and the former governor Dr. Shamshad Akhtar, Dr. Ishrat Husain, Mr. Yaseen Anwar and Mr. Ashraf Mahmood Wathra participated.

The participants shared their thoughts and candid views on their experiences and future vision for the Bank and congratulated executives and staff of the SBP for achieving several milestones in its 70 years’ journey. Governor SBP Mr. Tariq Bajwa in his concluding remarks stated that the SBP had always strived to living up to expectations of Quaid-e-Azam pertaining to professionalism and forward-looking approach in discharging its mandate.

A special documentary focusing on the history of the SBP was also screened during the seminar. The documentary portrayed challenges confronted by the Bank right after its inception, and its subsequent journey towards professional excellence.

On this special occasion, the Bank organized special exhibitions and Open House session that remained open to public and ran throughout the day. Mr. M.W Farooqui, the senior most employee of the Bank inaugurated the Open House at the age of 95 years. Mr. Farooqui has the distinction of attending the inauguration of State Bank of Pakistan by Quaid-e-Azam Muhammad Ali Jinnah on July 1, 1948.

Visitors from different walks of life were enthralled to be part of festivities that were started at Museum & Art Gallery and the Main Banking Hall. Dr. Shamshad Akhtar inaugurated the exhibition and unveiled the commemorative stamp issued by Pakistan Post. Mr. Akbar Ali Dero, the Postmaster General, Pakistan Post was also present on this occasion. Enlarged images of the stamps issued earlier were also displayed while a corner of the Museum was dedicated to the photographs of the past SBP governors along with coins and currency notes issued during their tenure.

The general public turned out in droves in Open House session. In order to provide the public maximum information on this day in a befitting manner, special counters were set up for the sale of Commemorative Coins and Prize Bonds to visitors. There was an exhibition of Currency Cycle and the stalls showcased Currency designing and printing processes and live demonstration of Currency notes examination machines, prize bonds draw. Live demonstrations of Desktop Notes Sorting (DNS) and Countertop Notes Sorting (CNS) machines; and Video display of state of the art notes processing system (BPAS Machine used by SBP) was also arranged for the interest of general public.