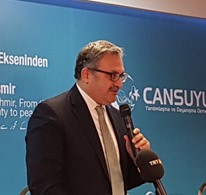 A day-long International Conference on Jammu & Kashmir was held in Ankara yesterday, focusing on the history of the conflict as well as the prevailing grave human rights and humanitarian situation in the Indian Occupied Jammu & Kashmir (IOJ&K). Organized by Turkish Cansuyu Organization, the International Conference was attended by a large number of prominent Turkish political figures; leading scholars; opinion makers; representatives of the Kashmiri people; civil society activists; students; as well as media representatives.

Speaking during the inaugural session of the Conference, the Ambassador of Pakistan M. Syrus Sajjad Qazi said that the denial of the right to self-determination to the Kashmiris remained at the very heart of dispute that posed serious threats to the peace and security of South Asia. He expressed deep concern at the prevailing serious situation in IOJ&K, including the continuing blockade of nearly 8 million Kashmiris and deteriorating humanitarian situation. He underlined that the unilateral and illegal steps of 5th August by India were in direct contravention of the international law and the relevant UN Security Council Resolutions on Jammu & Kashmir, and had been rejected by the Kashmiris. He said that Indian actions had been condemned by the relevant UN bodies; independent human rights organizations; international media; as well as dozens of parliamentarians from across the world.

Ambassador Qazi pointed out that the Indian atrocities in IOJ&K were a manifestation of the rising tide of right-wing extremism, jingoism, populism and Islamophobia, being promoted in India under the divisive ideology of Hindutva. He urged the international community to step in and discharge its moral, ethical and legal responsibility by bringing an end to the on-going Indian gross violations of human rights and collective punishments against the Kashmiris, as well as to uphold their right to self-determination. He also thanked the people and the leadership of Turkey for their principled stance in support of the just resolution of the dispute in accordance with the relevant UN Security Council resolutions.

Saadet Party Chairman, Mr. Temel Karamollaoğlu, in his address called for the resolution of the Kashmir and Palestine issues and reiterated Turkey’s support for the oppressed people of both the region. He also called for an immediate end to the sufferings of the Kashmiris, and allowing them their right to self-determination.

Ustad Racai Kutan, President of prominent Turkish think-tank, Economic & Social Research Centre (ESAM), in his address explained the background of Jammu & Kashmir dispute. He condemned the ongoing gross human rights violations in the region, calling for the resolution of the dispute in accordance with the relevant UN Security Council resolutions and the wishes and aspirations of the Kashmiris.

Mr. Oğuzhan Asiltürk, leader of Milli Görüş, in his remarks reiterated Turkey’s support for Pakistan for the just resolution of the Jammu & Kashmir dispute.

The President of Cansuyu, Mr. Mustafa Köylü, called for addressing the challenges being faced by Muslims in various regions of the world, in particular in the Indian Occupied Jammu & Kashmir and Palestine.

Later, Prof. Dr. Kudred Bulbul, Dean Faculty of Political Science of Yildirim Beyazit University moderated a panel discussion that focused on various aspects of the history of the Jammu & Kashmir dispute as well as the latest developments. Mr. Abdul Rashid Turabi, Member of Azad Jammu & Kashmir Legislative Assembly, Mr. Mushtaq Ahmed Jeelani, Executive Director of the Kashmiri-Canadian Council, Dr. Nadim Chaudhury of Istanbul University, Prof. Dr. Halil Toker, Chairperson of Urdu Department of Istanbul University, Mr. Cemal Demir, President of South Asia Strategic Research Centre and Muhammed Vefa of Milli Gazeette newspaper participated in the panel discussion. The panellists condemned the systematic violations of human rights in IOJ&K, calling for their immediate end, including lifting of the ongoing blockade. They also called for the implementation of the UN Security Council resolutions on Jammu & Kashmir that guarantee the exercise of the right to self-determination to the Kashmiris.

A photography exhibition on the ongoing human rights violations in the Indian Occupied Jammu & Kashmir was also organized during the event.