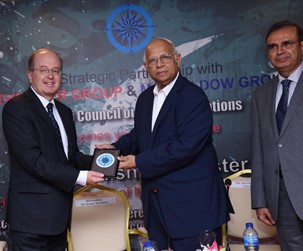 Mr. Hamish Mac Master, High Commissioner of New Zealand in Pakistan shared his views on bilateral trade relation with Pakistan at an event held in Karachi today. He was speaking at a dialogue hosted by the Karachi Council on Foreign Relations (KCFR) on breakfast at a local hotel. He also answered questions of participants.

Dialogue was moderated by Commodore Retd. Sadeed A. Malik, Secretary General KCFR. It was attended by Ikram Sehgal, Chairman KCFR, Lieut. Gen. Retd. Moinuddin Haider, Moin Fudda, spouse of High Commissioner, members of Board of Governors KCFR and other dignitaries in large number.

While expressing his grief and annoyance at the tragedy, High Commissioner said that the Christ Church tragedy caused number of deaths including nine Pakistanis; thus, that was the blackest day in the history of New Zealand. We are a peace loving country and there is no room for such coward incidents.

Following these attacks, our prime minister expressed her deep sympathy with affectees and we immediately banned such weapons.

He added that the Prime Minister of Pakistan also gave a call to our prime minister and expressed his country’s solidarity for which we are very thankful to Pakistan and Pakistanis.

NZ High Commissioner recalled the fateful day and told how it shaken the whole world in general and New Zealand in particular. We are shocked and grieved. Our prime minister immediately responded the way which was admired by everyone in the world, he appreciated.

Responding to a question by a participant, Mr. Hamish Mac Master told that volume of bilateral trade with Pakistan is 160 million dollars at present. A good number of PhD students from Pakistan are studying in NZ, he informed.

About Kashmir, Mr. Hamesh Mac Master told that NZ constantly trying to deescalate this situation. We usually keep away from territorial conflicts but we wish that Kashmir issue should be solved very soon as we also have Kashmiri community there in New Zealand.

About visit of NZ cricket team to Pakistan, he responded that this will be decided by the ICC.

In his concluding address, Ikram Sehgal, Chairman KCFR lauded role of New Zealand for peace and said that way of sympathizing Christ Church victims by the Prime Minister of New Zealand was applauded by everyone. We appreciate her gestures, he added.

The High Commissioner was presented Crest of KCFR by Ikram Sehgal and Mr. Hamesh also presented a book to him.