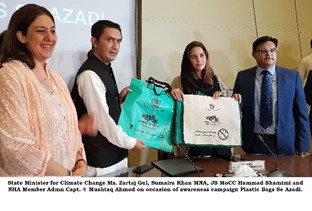 Speaking on the occasion, Ms. Zartaj Gul said, addressing the menace of plastic waste is an integral part of the Prime Minister’s Clean and Green Pakistan Movement. It is alarming, she said, that 55 billion plastic bags are being used annually in the country that amounts to consumption of 275 bags, per person per year. She said, Plastic Bags not only mar the environment but they also cause flooding in the Cities. For effective implementation of the campaign she desired cooperation of Government Organizations, Civil Society and Media. She also commended contribution made by NHA towards success of Clean and Green Pakistan Programme. Ms. Zartaj Gul also recalled “Apni Shahrah” project under which saplings are planted gradually along motorways and national highways network. Environment Friendly Bags were also distributed among the participants of the ceremony.