Federal Minister for Finance and Revenue Shaukat Tarin has announced that with effect from July 1, 2021, no notices will be issued by the FBR as the taxpayers will be 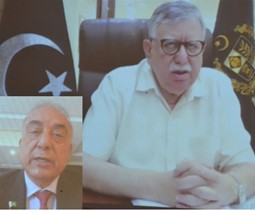 able to carry out self-assessment whereas only 4 to 5 percent of the cases will be sent for audit which will not be done by FBR but by third party.

“I want to remove harassment by FBR. Although there are good people at FBR but there are also some troublemakers. Hence, we have agreed upon Universal Tax Self-Assessment and the audits by third party only”, he added while speaking at an online meeting with BMG Leadership and KCCI Office Bearers on Thursday.

Shaukat Tarin warned that if any wrongdoing was found after the audit by third party, it will result in initiation of investigation and punitive action. “In this regard, we have created a section to review all the bills, number of deposits and travel history etc. of individuals and if any person is found liable to pay taxes but is a defaulter, such cases will be sent to third-party auditors to prove tax default and if proven, these defaulters will be put behind bars”, he said, adding that laws will be devised to put such persons behind bars responsible for willful default.

He stated that the government was focused on rationalizing the turnover tax in order to make some sense as it varies in numerous cases.

The Minister also agreed that when three percent penalty was being charged in case of unregistered persons, the CNIC condition should not be there. Hence, the Minister directed FBR to look into this matter and stop demanding CNIC. “A call center will also be established at FBR in which complaints can be lodged which I will personally review on daily basis to ensure accountability at the FBR”, he added.

In response to concerns expressed over dilapidated infrastructure of Karachi, Shaukat Tarin informed that a three years package of Rs900 billion has been allocated under PSDP for Karachi which will be finalized by the PM. “During discussions on this allocation at a meeting which will be presided over by the Prime Minister, I will definitely raise business community’s concerns and I will be your promoter.”

He said that the government was trying its best to facilitate the SMEs and, in this regard, the SMEs falling under the bracket of Rs2 million will be provided ‘clean credit’ facility with no security. For this purpose, the government will be providing huge amount of funds to banks at 8 percent which will be given to SMEs at 9 percent while credit insurance will be provided by the government. “It is a matter of grave concerns that out of a total of 6 to 8 million SMEs, only 180,000 SMEs have access to credit, hence efforts will be made to extend credit facility to at least 1 million SMEs in the next two years.”

He said that FBR will also be directed not to stop refunds of SMEs and small businesses. “We will clear all the backlog of refunds within a few months by issuing Tradeable Bonds so that the businesses could have sufficient amount of liquidity available with them and a smarter mechanism will be introduced to clear refunds within 60 to 90 days.”

Referring to concerns expressed over Rs58 billion refunds pending under DLTL scheme, Shaukat Tarin termed it as ‘a very good point” and directed FBR expedite the refunds while DLTL should not be collected this year as the FBR already owes huge amount.

He said that reforms were being introduced at the revenue side which will ensure that no harassment takes place and there will be no double taxation. “The IMF has been pushing us to stop all exemptions and impose additional tax of Rs140 billion on existing taxpayers which I denied”, Shaukat Tarin said, “Only blatant exemptions will be dealt otherwise the rest will continue. We are broadening the tax base by making good use of technology and innovation which will neither be coercive nor regressive but will be devised in consultation with the business community.”

Finance Minister also assured to regularly hold meetings with KCCI at least once in three months so that dialogue on an ongoing basis continues to promptly resolve business community issues while the FBR will be directed to consider and resolve all the technical issues being raised by KCCI.

Speaking on the occasion, Chairman BMG Zubair Motiwala pointed out that despite the outbreak of COVID-19, Karachi has given 18 percent growth in exports and it overall exports stood at 58 percent therefore, the Federal Government must take Karachi’s robustness into consideration and accordingly give its due share which has unfortunately not been given so far.

He said that although a subsidy was earmarked for Karachi’s energy needs but as per Ministry of Energy, the earmarked amount exhausts by paying for uniform tariff across the country and no amount is left to give subsidy for gas at 6.5 dollars per MMBtu to the five export-oriented sectors. The subsidy does not account for the Hydel electricity portion which is given to KE as a right of Karachi over Hydel Power. If the same is calculated at the cost of hydel electricity, then this subsidy can automatically be saved and given for the sale of gas at 6.45 per MMBtu to the five export-oriented sectors.

He also stressed that 80 percent of goods were being exported by five export-oriented industries but they have been facing severe liquidity crunch due to delays in release of refunds hence, the government must look into the possibility of restoring the zero-rated regime for five export-oriented industries which would certainly prove favorable for the economy by boosting the exports. “The progress of textile sector and all the remaining four industries would double if zero-rated regime is restored”, he added.

Expressing concerns over CNIC condition, he said that the business community was compelled to pay further tax of 3 percent on failure to submit CNIC but even after charging this 3 percent penalty, FBR demands CNIC which was totally senseless as it was practically impossible to find registered persons. He requested the Minister to look into this serious issue and order the FBR to withdraw CNIC condition.

He said that the business community has received substantial number of notices during the last two-and-a-half years which will be higher than all the notices sent during the last one decade. No major recovery was witnessed from such notices which were just a waste of time and resources while the FIA’s involvement through access to bank accounts’ information, which was happening in Karachi only, must also be stopped as it was being misused to harass the business community.