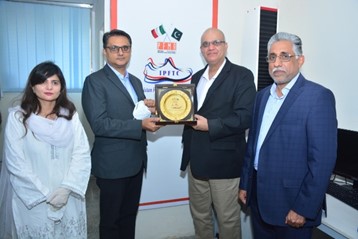 Imran Malik (MD Bata) on current Industry situation and obstacles faced by Industry to increase its export. PFMA Chairman gave brief presentation about industry requirements and necessary demands both from Provincial and Federal government to facilitate and remove regularity barriers creating hindrance in its progress. The Visit was important to limelight vital issues of Footwear Industry and possible solution to address them.

PFMA Chairman explain that Footwear Industry of Pakistan has 2 million work force that Produce 411 million pairs annually with domestic consumption of 424 million pairs annually. Whereas 24 Million pairs are being imported annually contrary to 11 million pairs are exported to leading European countries. Pakistan Ranked No. 7 in top footwear producing countries of the world with just 0.1% share in world Footwear exports which consist of $142 billion net worth. In order to increase our world market share and increase productively, Industry need support both from provincial and Federal Government to make it leading exporting sector of Pakistan which hold great potential to generate more jobs opportunities domestically, earn foreign exchange and reduce balance of payment gape.

To make Footwear Industry of Pakistan as leading exporting sector, PFMA Chairman has put forward list of impediments that need to be addressed immediately. At provincial level, Government must allocate Land to PFMA on lease terms to operationalize its functionality. Punjab Government must establish Footwear Park in designated Industry zone to help industry increase its export capacity. Similarly, like Italian Government, Provincial Government must announce financial grant for Italian Pakistan footwear Technology center that will help the industry to enhance its technical skills and equipped themselves to produce International quality products. IPFTC testing labs must be accredited by the Government to authenticate its certification. Punjab Government may formulate Footwear policy to promote Footwear sector especially for SMEs that hold the potential to generate more employment at local level. IPFTC skill development courses are designed through TEVTA to increase its outreach and efficacy. Government must offer financial support to organize footwear exhibitions across the country for local Manufacturers and SMEs to promote their products.

Similarly, The Federal Government must formulate friendly policies for Footwear industry to increase its production capacity and Investment opportunities. This sector must be declared Zero rating for GST to provide tax relief and enhance export rebate. Under FBR Statutory regulatory order (SRO 700(1)/2018), Govenrment must increase the duty drawback on taxes & Levies and extend the regime for maximum benefit to the industry to increase productivity. One time exemption must be given by EADso PFMA can take back bank guarantee from Custom authorities as it has already imported Footwear Machinary from Italy for IPFTC testing labs on their personal expense. There is a need to reduce in customs and regulatory duties on import of Raw material for Footwear sector and withdrawal of addtional cusomes duties on import of raw material used to produce export oriented products by Footwear producers. Government must offer special discounted Electricity for footwear Industry and introduce zero sales tax on all kind of Footwear machines.

By taking these steps, Government will not only increase productivity and investment in this sector but also remove all barriers to increase its exports to become Number one Footwear Exporter in the world.