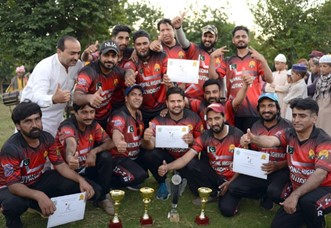 The tournament aims to keep NHA employees healthy and alert, as well as promote healthy sports and positive activities among them. They have to form the authority’s cricket team. The final match was held between Admin Star and Multan Stallions which was won by the Admin Star team of National Highway Authority in which the Man of the Match award was given to Mr. Shehzad.

National Highway Authority General Manager Mr. Umar Ali Shah Banori presented the trophy to the winning team while prizes and certificates were distributed among the other best performers. It may be recalled that a special committee has been constituted in the National Highway Authority for the promotion of sports and in this regard Assistant Director CP Fund Ms. Maleeha Siddiqui has rendered invaluable services and thanks to her efforts cricket for the second time in NHA that this tournament is started and will also be continue in the future.