Skip to content
Owner of barge Heng Teng 77 appointed Bahira Maritimes Services in Pakistan-Pakistan steel sector to announce the excellent results soon-Outlook and recommendations for week commencing from July 26-FPCCI requests Sind Govt to revisit their decision on Dine-in and Dine-out Closure in the Restaurants-LCBDDA announces the auction of 5 commercials plots in the heart of Lahore-An increase in LPG prices is unacceptable, KATI-Zong 4G supports Islamabad Police’s fight against Covid-19-PSX index performances eon Friday-Pakistan policy rate likely to stay unchanged at 7%: Expert-Virtual Conference on the Pakistan-China Relationship and CPEC-Pakistan’s reserves increased by US$ 845.0 million-Wapda Chairman calls on Chinese Ambassador-Pakistan textiles export during FY21-Careem wins ‘Most Innovated App’ at Pakistan Digital Awards ‘21-Boskalis awarded a contract for deepening the approach channel to the harbor of Harwich, UK 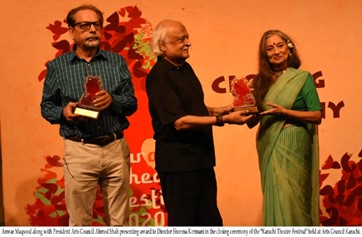 “President of the Arts Council Muhammad Ahmad Shah would have defeated Trump if he had been in the United States. We should appreciate the young directors”, said Anwar Maqsood, a well-known writer and intellectual. He was addressing the closing ceremony of the Karachi Theater Festival at the Karachi Arts Council. He said that there is no shortage of talent in Pakistan as the Arts Council has successfully organized the “Theater Festival”. You all deserve congratulation. Anwar Maqsood added that out of 100% of dramas aired on TV, 90% are female writers who consider dramas as fun.

On this occasion, the President of Arts Council Muhammad Ahmad Shah said that the doors of the theatre were starting to rust; Anwar Maqsood has given life to the theatre through his plays.

The creative team of Arts Council Karachi with Meesam Naqvi made the festival a success. Congratulations to the entire team of the Arts Council for organizing this fantastic festival. He further added that the festival was organized with all the SOPs because of the Corona so that things could be normalized.

In the closing ceremony, Anwar Maqsood presented awards to the directors of the Karachi Theater Festival for the best performance.

On the last day of the festival, Farhan Alam’s play “Good Luck Darling” was presented.