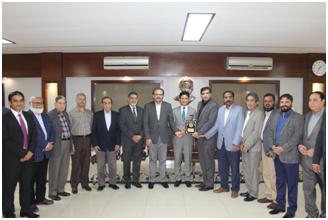 Consulate General of Malaysia Khairul Nazran Abd Rahman has said that we are working together with Pakistan working together with Pakistan on joint venture and technology transfer. He highlighted that Malaysian investors and tourists want to visit Pakistan and mentioned that the close proximity between the Prime Ministers of both countries also brings warmth in bilateral relations.

He expressed these views while addressing the Korangi Association of Trade and Industry (KATI).

He said that friendship between Prime Minister Imran Khan and Prime Minister Malaysia Mahathir Muhammad is very cordial and our entire nation is full of support for Malaysia’s strong support to Malaysia on international forums. Sheikh Umer Rehan said that after the improvement of law and order, there were numerous opportunities for mutual cooperation and investment for Malaysian investors in Pakistan’s industrial, agricultural and SME sectors.

Zubair Chhaya called for exchange of delegations to increase bilateral trade.He said that we are ready to play a role in bilateral efforts to strengthen our relations. Masood Naqi said that the partnership between our two countries in the field of halal certification, agricultural products, livestock and seafood can promote industry and business.

Earlier, Consul General Malaysia Khairul Nazran Abd Rahman said that there have been successful experiments regarding technology transfer in automobile sector and petroleum sector between Malaysia and Pakistan. He said that the strong bond between the leadership of the two countries has also created warmth in bilateral trade and economic relations. He said investors and tourists from Malaysia want to visit to Pakistan and we are encouraging them. He also invited KATI officials to attend Malaysia Vision 2020 event.