Skip to content
Home » Business community issues to be resolved on a priority basis: Korangi Administrator 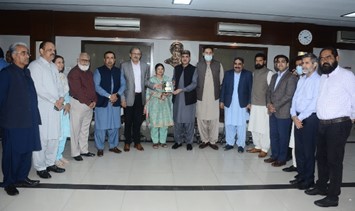 Development works, sewerage, and improvement of infrastructure of Korangi Industrial Area are under process, and all possible steps are being taken to solve the problems of the industrial area. These views were expressed by Javed-ur-Rehman Kalwar, Administrator, Korangi District, at a luncheon given by Korangi Association of Trade and Industry (KATI) in his honor after assuming the responsibilities as Administrator.

KITE CEO Zubair Chhaya drew the attention of Administrator Korangi to the section of Road 3000 which leads to EBM Causeway. He said that due to the dilapidated condition of the road, the rate of snatching and other crimes is increasing in the evenings, so orders should be issued for immediate construction of Road 3000 so that EBM Causeway also be rebuilt. Zubair Chhaya further said that without industrial development neither the economy can be strengthened nor the country can develop.

Masood Naqi, while giving suggestions on various avenues of DMC, said that this period could be significantly increased, while the proceeds should be spent on the construction and development of the Korangi Industrial Area. Nighat Awan, chairperson of KATI’s Standing Committee on Water and Sewerage Board, while drawing attention to the sewerage problems, said that in some areas the sewerage system is in a very bad condition, due to which roads are deteriorating and infrastructure is in poor condition. That needs immediate attention of the concerned department. On this occasion, the representative of the Water Board said that they will solve the problems related to sewage in the next one week, failing to which they will announce a strict strategy.