Skip to content
Home » All out efforts being made to somehow control rising street crimes: DIG East 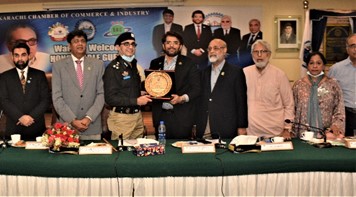 DIG East Saqib Inam Memon, in response to deep concerns expressed over rising street crimes all over the city, stated that keeping in view Karachi’s population and the dimensions of this city, it was really a challenging task to deal with the menace of street crimes but all out efforts were being made to somehow control rising street crimes and provide relief to citizens.

“Thanks to the efforts being made by really hardworking and dedicated police officers, we have succeeded in foiling many criminal and terrorist activities however we are never appreciated for all the good things but strongly criticized for being unable to completely eradicate street crimes”, he said, adding that strenuous efforts will be made to thwart all types of criminal activities happening in this city so that the business community and the citizens could move fearlessly on the streets of Karachi.

Referring to concerns expressed over manhandling of businessmen in connection with NCOC’s directives to strictly observe business timings, DIG East said that police officers were not trained to deal with this kind of situation in which the businessmen were being compelled to shut down their businesses. “Unfortunately, this was happening as we are trained for dealing with crime and criminals but in the ongoing extraordinary situation, we have to force shopkeepers to shut down their shops”, he said, “It is not an excuse as businessmen must not be mistreated at any cost. We will look into this issue and take steps by strictly advising police officers to act politely.”

He also agreed to hold a meeting by every month-end for discussing law & issues being faced by KCCI members which would certainly improve coordination with KCCI and promptly resolve issues.

Chairman BMG Zubair Motiwala, who also joined the meeting via phone, stressed that the complaints raised by Karachi Chamber should be given special attention and resolved on top priority. KCCI’s arbitration in any law and order issue has to be taken seriously as this Chamber would only intervene to seek assistance in resolving genuine issues being suffered by businessmen. While underscoring the need for improved coordination between KCCI and police department, he extended full support and cooperation to police department in dealing with any issue related to business community.

General Secretary BMG AQ Khalil, in his remarks, pointed out that instead of overburdening a single SHO by giving the task to look into all the affairs of police station 24 hours a day, at least two SHOs should be given the charge of one police station whose duty timings should be distributed equally which would certainly help in improving the performance of police stations. “Police stations and officer have to be equipped with latest equipment and gadgets so that they could promptly respond to and efficiently handle any law and order incident”, he added.

Speaking on the occasion, Senior Vice President KCCI Saqib Goodluck stated that the Karachi Chamber has been playing an active role in resolving numerous issues being faced by the business community, of which the most serious issue that requires attention was rising street crimes happening all over the city even during broad daylight.

He requested DIG East to devise effective strategies to strictly deal with and put an end to the incidents of street crimes which have created a miserable atmosphere not only for the business community but also for all the citizens of Karachi who always fear of getting looted as soon as they step out of their houses or workplaces.

Vice President KCCI Shamsul Islam, in his remarks, said that there were identified locations where street crimes were constantly taking place but no concrete step has been taken to secure these hotspots. “The police department should enhance patrolling at such sensitive locations so that the culprits could be apprehended”, he added.

Chairman Law & Order Subcommittee Junaid ur Rehman, while underscoring the need to improve coordination between KCCI and Police Department, suggested to hold an interactive meeting at least once a month so that the law & order issues being faced KCCI members could be promptly resolved.

Chairman Special Committee for Small Traders Majeed Memon expressed deep concerns over the extremely poor attitude of police officers who terribly misbehave and manhandle the respectable members of the business community in order to forcefully get their shops closed as per directives of the NCOC. “This is a very serious issue. Respected businessmen/ shopkeepers should not be mistreated or abused by police officers who must act politely while dealing with business community”, he added.