Barrister Murtaza Wahab – Administrator Karachi, had a detailed interactive discussion with Presidents of Pakistan’s banking sector and CEOs of several 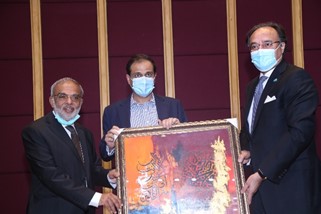 leading corporates to seek their support towards his initiative of launching infrastructure and beautification projects for Karachi city. The breakfast meeting was held at Meezan Bank’s Head Office.

Welcome note was given by Chairman Pakistan Banks’ Association (PBA), Mr. Muhammad Aurangzeb in which he gave assurance of support towards this initiative from the banking sector. Following the welcome note, Mr. Murtaza Wahab gave a detailed update on the latest projects, either completed or in pipeline, by the Sindh government, to improve the city’s infrastructure. He further informed them about infrastructure and beautification projects such as parks, underpasses and bridges in the city that banks and private sector organizations can adopt and independently maintain.

He elaborated the importance of Public-private partnership and invited the meeting’s participants to play their role in the city’s beautification and infrastructure improvement by adopting projects of their choice under their CSR initiatives. Mr. Irfan Siddiqui, President & CEO, Meezan Bank, while giving the vote of thanks to the chief guest, also thanked all the Presidents and CEOs for their participation in this event.