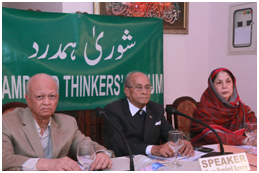 Members and speakers at the meeting of Shura Hamdard Karachi chapter unanimously demanded the federal and provincial governments of Balochistan, Sindh and Punjab to include essays on Hakim Said in their school’s curricula, as did by KPK government, keeping in view his great services to the nation particularly in the fields of education and health.

The meeting was held on Thursday January 12, 2017 on the theme: “Hakim Said — Vision and Mission”, presided over by Justice (Rtd) Haziqul Khairi at a local hall.

Speaking on the occasion former judge of Supreme Court, Justice (Rtd) Zia Pervez said that there was a great need of promoting the ideas of Hakim Said in general and his ideology of education in particular to spread education in each corner of the country as not only villages and towns but cities too were deprived of schools of good standard. Should Hakim Said’s message on education be communicated to each and every corner of the country no village would remain without a school, he added.

Zafar Iqbal, President, Small and Medium Enterprises Association said that Hakim Said was Sir Syed of Pakistan as he had not only established many educational institutions but also a big university in private sector and done a lot of work for children. Keeping in view his tremendous work for the education and training of children, the Defence Residents Society had bestowed upon him the title of “Quaid-i-Naunehal” (Leader of Children).

Nusrat Nasarullah, a seasoned journalist said, all people knew about achievements of Hakim Said, but few people aware of his message, which should be propagate on national level. The Idara-i-Said, established to propagate and open his mission and ideas before public, must do it. It was also the responsibility of intellectuals, journalists and writers to extend the surface of his mission and ideas in order to bring in an educational revolution in the country, he added.

Paying tribute to Hakim Said, Dr. Rizwana Ansari said that his motive of life was service, service and service. He, in the words of Bhittai: “was among those persons who come in the world to spread fragrance of springs.”

Dr. Abubkar Sheikh was of the view that persons like Hakim Said were not born every day, for the nature used the mould of creation of such personalities rarely. He urged to prepare a comprehensive biography of Hakim Said for the guidance and inspiration of coming generations. Prof. Kafil Ahmed opined that the best way to pay tribute to Hakim Said was to share his mission and contribute to it whatever we could in our own capacity. Nihal Hashmi said, Hakim Said was no doubt a great man as he had the particular quality of great men – the truthfulness. Ms. Shamim Kazmi emphasized on sharing more and more information about Hakim Said on internet for the inspiration of new generation.