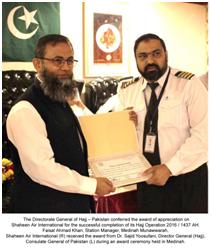 Shaheen Air International (SAI) proudly announces that it has been awarded with a certificate of appreciation by the Directorate General of Hajj – Pakistan. The award has been bestowed upon the airline for its successful completion of the Hajj operation 2016 / 1437 AH.

The award was presented by Dr. Sajid Yoosufani, Director General (Hajj), Consulate General of Pakistan in a ceremony held in Medinah. Throughout the course of the operation, 33,000 pilgrims from six cities of Pakistan: Karachi, Lahore, Islamabad, Multan, Faisalabad and Peshawar, were transported to Jeddah and Medinah through exclusive flights.

Previously, Shaheen Air International had also received a letter of appreciationbySardar Muhammad Yousuf, Federal Minister of Religious Affairs for its successful Hajj services which the airline rendered in 2015.