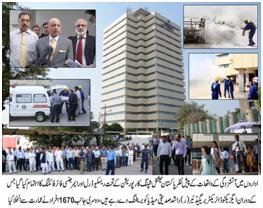 By order of Chairman PNSC Mr. Arif Elahi, in this fire drill 1670 peoples evacuated from eight organizations in PNSC building within 7 minutes under the instructions to stage a quick exit to let fire fighters have an access through inner parts of building.

During drill, the fire fighters quickly restored the water supply from the basement storage of this building and extinguished the demonstrated fire. Ambulances were also stand by for injured employees.

Brig (r) Rashid Siddiqui with a profound satisfaction after this drill said that it was a successful exercise up to 95 percent to trace out short comings and done away to help keep up the moral of PNSC and stake holders. Rashid Siddiqui also added that modern fire fighting appliances and fast smoke extractors are equipped in PNSC building for rescue in asphyxia and smoke inhalation.

He informed that a seven days updated fire fighting course also being conducted by PNSC for employees as well as for our tenants.