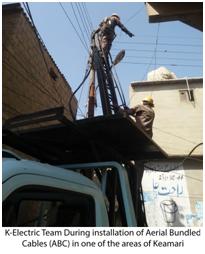 Under K-Electric’s flagship community development project ‘Ujala’, installation of Aerial Bundled Cables (ABC) in one of the areas of Keamari has been completed within 2 weeks while the drive is currently underway on fast track basis in other areas.

An inauguration ceremony was held recently to mark the ongoing development.


During the drive, not only illegal hook connections were removed but preventive maintenance of power infrastructure in the area was also performed while installation of new equipment including 51 poles was ensured. This initiative will enable the provision of reliable power supply to the residents and also help enhance load management in surrounding areas due to reduced losses. Moreover in order to facilitate consumers on their doorstep, an IBC on wheel was also arranged and 350 meters were installed and energized whereas another 150 meters would be installed soon.

According to K-Electric spokesperson, “The utility has so far transformed different communities through the installation of ABC, new transformers and low-cost connections. Localities like Lines Area, Liaquatabad, Ghazdarabad, RehmatChowk, Altaf Town and Keamari are now power theft-free with a minimal fault ratio which were previously infested with illegal connections and fault ratio was quite high.”

K-Electric launched its flagship community development project ‘Ujala’ earlier this year, with an estimated investment of PKR 5 billion to empower the lives of over 1 million people residing in 200 communities across its network. The utility has pledged to help improve the reliability of power of these communities while boosting socioeconomic activities through sustainable development initiatives.