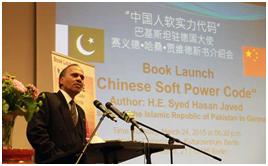 China Create Foundation which is being launched as the equivalent of Global Nobel Prize Foundation has nominated Pakistan’s Former Ambassador in Germany, Singapore and Mauritius Syed Hasan Javed as a Member of its Advisory Board.

The Board comprises of eminent scientists, scholars, diplomats and Nobel Prize Winners. Five Prizes and Awards will be awarded to noted scholars on their achievements in Applied physics, Applied Chemistry, Literature and Fine Arts, Economics and Innovation.

Ambassador Javed is a noted Sinologist who has served in China for ten years, speaks Mandarin fluently and is author of several books on China. He is the first Pakistani to be appointed to the Advisory Board for a period of 3 years, which is holding its Inaugural meeting on 21 December, in Shenzhen.