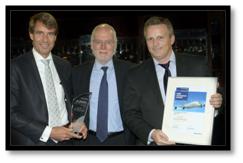 Airbus, manufacturer of the A380 aircraft, has presented Etihad Airways, the national airline of the United Arab Emirates, with the award for ‘Top Operational Excellence’ for A380 operations in 2015-2016.The Etihad Airways A380 fleet recorded a remarkable 99.63 per cent operational reliability between January 2015 and October 2016, the highest of all 13 airlines which operate the Airbus A380 aircraft.

Operational reliability is a standard international index measuring flight operations subject to delays or defects. High performance in this index verifies the operating capability of the airline and the priority given to maintenance and safety management. Jeff Wilkinson, Chief Executive Officer of Etihad Airways Engineering, said: “Our entire team is totally focused on achieving the highest levels of reliability across our fleet. The A380 has been a fantastic addition to our fleet over the past two years and this award demonstrates excellence and the success of our ongoing close cooperation with Airbus.”

The award was presented by Christian Fremont, Airbus Head of A380 Programme Support, at Airbus’s A380 Symposium in Munich, Germany, this week. Etihad Airways has eight Airbus A380s in service, with two more scheduled for delivery. The aircraft operates from the carrier’s Abu Dhabi hub to London, New York, Mumbai, Melbourne and Sydney.