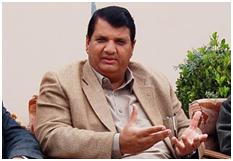 Adviser to Prime Minister on Federal Departments in Khyber Pakhtunkhwa, Amir Muqam visited Higher Education Commission (HEC) Secretariat on Wednesday and met Dr. Mukhtar Ahmed, Chairman HEC. The Chairman welcomed Amir Muqam to HEC and briefed him about HEC’s initiatives for promotion of higher education in the country, said a news release on Wednesday. He said since inception of HEC in 2002, number of universities had increased remarkably, while HEC followed no-compromise policy on quality.

He maintained that research activities in the country had gained momentum during the last decade. He said HEC was emphasizing on research dedicated to solution of prevailing socio-economic problems of Pakistan.

The Chairman said that Shangla campus would initially be permitted to operate two disciplines, namely BS in Computer Science and Information Technology.

He informed the adviser that works on Swat University’s permanent campus was already underway while arrangements for starting women campus are also under process where classes will be started in coming Fall.

Amir Muqam lauded the remarkable progress of higher education sector in the country and HEC’s efforts and achievements in this regard.