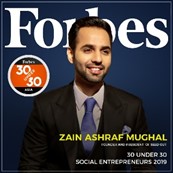 Through his organization, Seed Out, a crowd funding platform that is a non-profit, non-religious and non-political organization, Zain Ashraf Mughal works to alleviate poverty by establishing micro-entrepreneurs through interest-free micro financing and creation of sustainable economic activity. Seed Out’s beneficiaries belong to the lowest socio-economic segment of the society. In the 4 years since its inception, Seed Out has raised 600+ entrepreneurs in four cities across Pakistan with an average financing of PKR 90,000 per person. Under Zain Ashraf Mughal’s leadership, 1600 children have gone back to school and left child labour.

Speaking about being named as a FORBES 30under30 Asian entrepreneur, Zain Ashraf Mughal said: I am honoured to have been named and for Seed Out’s work to have achieved this global recognition. I am proud to have put my country on the map for work and a narrative that is positive and progressive.

Accolades such as this help me further the vision and goals I have for my work, which is to eradicate poverty in Pakistan by cultivating an enabling environment for entrepreneurs to succeed with sustainability. Every life and the quality of each life matters and we should create equal playing fields for everyone.”

After acquiring a Bachelor’s degree in Business Administration from the University of Miami and majoring in Entrepreneurship, Zain Ashraf Mughal has built up a team of entrepreneurs all over Pakistan with Seed Out. Zain Ashraf Mughal is also the first Pakistani to receive the Commonwealth Youth Award for Excellence in Development work in London at the Commonwealth Heads of Government Meeting 2018, where he was a part of the roundtable meeting with Prince William, Duke of Cambridge for sustainable development work in Commonwealth countries. Zain was also met by Duke and Duchess of Sussex, Prince Harry and Meghan Markle, where they further praised and encouraged the model of Seed Out.
The FORBES 30 Under 30 list for Asia can be viewed here: