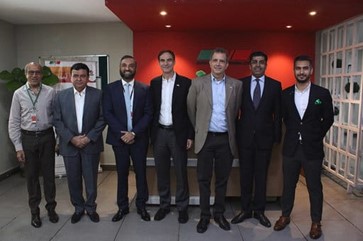 Excelerate Energy is an American company headquartered in the state of Texas and stands strong as Engro’s trusted partner in the Liquified Natural Gas (LNG) terminal. Since 2003, they have built up a global track record of accomplishments and innovation, and are the recognized leader in floating LNG regasification solutions. Excelerate Energy is the only floating LNG provider offering services across the entire midstream LNG chain. This terminal is a testament to Engro being a partner of choice for global companies that are best-in-class. Engro has always endeavored to bring the best of the world to Pakistan because developing markets require FDI in infrastructure and projects to remain on a path of progress.

Ambassador Jones was pleased, and remarked, “It is very nice to see the great contribution being made by Engro and Excelerate Energy through LNG to uplift Pakistan by supplying cleaner and cheaper fuel to ensure homes and industries get the gas they need for day-to-day use and to fulfill industrial requirements. I commend both companies on this incredible milestone of the world’s fastest 250 ship-to-ship transfers of LNG. Engro and US company Excelerate, together, have proven to be a robust US-Pakistan partnership.”

President of Engro, Ghias Khan, on the occasion, remarked, “We are happy to have Ambassador Jones visiting us today. Our American partner, Excelerate Energy, has played a pivotal role, which has made these milestones possible. Further, Royal Vopak, which is a 25-year old joint venture partner with Engro in another business, has extended their relationship to the LNG terminal. We consider the LNG projects in the country to be of great importance, with two terminals in the country and several more in the pipeline – the impact on Pakistan’s energy requirements is very positive while it has reduced Pakistan’s gas deficit by 50%.”

Located adjacent to the Engro Vopak terminal on the mainland side of the channel into Port Qasim, the Engro Elengy Terminal was a fast-track LNG import solution built to alleviate the energy shortage facing the country. The terminal was built in a world record time of 330 days and has emerged as the largest gas source in Pakistan with capacity to inject up to 690 mmscfd RLNG into the system, leaving behind Qadirpur and Sui Gas fields. With round-the-clock supply of natural gas at a utilization rate of approximately 98%, the terminal has now handled over 250 LNG cargo ships and is fulfilling 13% of Pakistan’s gas requirements.

Since LNG was introduced in the country, Pakistan has imported over 19 million tons of LNG and saved about $5 Billion because LNG replaced the import of more expensive furnace oil. Pakistan has educed its gas deficit, revived the CNG sector so people no longer face long queues at CNG stations to fill gas in their cars, revived the fertilizer sector where Pakistan went from importing 1,000,000 MT of Urea to being an Exporter of Urea, and revived more than 500 industrial units because gas availability to industry is now uninterrupted. In fact, with LNG, Pakistan’s households no longer face winter gas load-shedding as there is now swapping between LNG and domestic gas with no price increase.

Aside from saving the country massive amounts of money, LNG is also considered the cleanest hydrocarbon in the world, and approximately 15-25% more efficient than alternate fuels. Now that Pakistan has ready infrastructure and multiple LNG projects in place, it has become a major buyer of imported gas in South Asia’s booming LNG market.