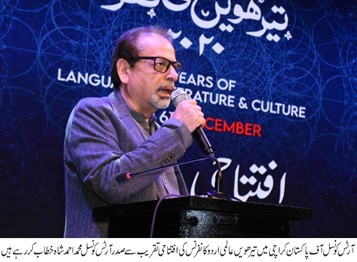 Addressing the 13th International Urdu Conference organized by Arts Council of Pakistan Karachi, the scholars and intellectuals said that no matter the language, hatred does not teach love. Urdu has spread the message of love all over the world. Writers and intellectuals should guide society. In a society, literature goes hand in hand with the whole society. The Urdu language moves across the borders like a breeze. The development of the Urdu language in this century has not been as great as in the last two or three centuries. The more the Urdu language was crushed, the more it developed. No language of Pakistan is in conflict with Urdu. The purpose of the Urdu Conference is to show what effect the writers have left on the society with their creations and what role they should play for the guidance of the future society.

Zada Qasim Raza Siddiqui, Zahida Hina, Noorul Hadi Shah, Hasina Moin, Prof. Sehar Ansari, Qudsia Akbar, Shah Muhammad Marri Yusuf Kushk while Iftikhar Arif, Gopi Chand Narang and Yasmeen Hameed addressed the video link. The World Urdu Conference Arts Council of Pakistan Karachi was seen live on social media all over the world. Syed Sardar Ali Shah, Provincial Minister for Culture and Tourism, who was the special guest at the World Urdu Conference, said that Ahmad Shah was credited with trying to create a real Pakistan in the form of the World Urdu Conference. The four units of Pakistan are not administrative but constitutional. They have their own language and culture thousands of years old and the Urdu Conference of Arts Council Karachi is a link to unite these cultures. This is the dream our elders had in the case of Pakistan.

He said that Sindh has never spoken of hatred. Sindh is the land of love. He said that Urdu is made up of all languages ​​and today speakers of all languages ​​are sitting under the presidency of Zahra Nigah. He said that besides Urdu, languages ​​of all nationalities should also be declared as national languages. A bill to declare other languages ​​as national languages ​​has been in the assemblies for ten years so that we do not have to regret that India can declare 26 languages ​​as national languages. So why don’t we speak four languages, Arts Council President Ahmad Shah said that 13 years ago this dream was successfully carried out but today we are saddened on the occasion of the 13th World Conference because some people are not with us in this conference. He said that due to the current situation, the participation of more people was avoided and many of our writers and poets are joining the conference through video link in this global Urdu conference as we have continued this tradition. Wanting to keep alive, he said that no language of Pakistan is in conflict with Urdu but some people want to do politics on the basis of language. He said that there is no difference of opinion among the intellectuals of different languages ​​except for ideas. He said that the purpose of this Urdu conference is to bring together people of different ideas and let us know that philosophers and writers have created a society with their creations. But what impact should we have and what role should we play in improving the society in the future? Josh Maleeha Abadi, Sadiqin, Mehdi Hassan, Kamal Ahmad Rizvi and other writers and intellectuals and artists are being named after different parts of the Arts Council Karachi.

Recite your two beautiful poems. Yasmeen Hameed from Lahore while reading his keynote dissertation said that there is no limit to the literary era. The period from 1920 to 1936 is the end of one era and the beginning of another. Gopi Chand Narang said that writers and Intellectuals should lead the society. It is the great responsibility of the writers to convey both aspects of the society to their readers. He said that I was born in Balochistan and I did my matriculation from Balochistan. Seraiki language is milk. Like the first stream of, joined in my blood, the work of Karachi Arts Council is an example for the whole subcontinent, Iftikhar Arif said that first of all love your language and your people. Languages ​​have become a political issue in Pakistan. Many events have taken place in the centenary history of Urdu literature. Prof. Sahar Ansari said that literature has never received as much attention in this century as it has before. Languages​​have never received as much attention as humans and animals are getting in this era The only difference between them is literature and languages ​​have played a role in teaching literature.

Leading Indian critic and poet Shamim Hanafi said that capturing our collective past would be fatal in every way and would limit and divide both the history and geography of our literary and cultural tradition, with literature, culture and art. The treatment of the centers of power is the same everywhere, it needs to be improved. Prof. Dr. Pirzada Qasim Raza Siddiqui said that this Urdu conference is a practical demonstration of the best performance in adverse conditions. Literature speaks of the virtue of man and humanity. Literature of any language will be connected with the virtue of man, said Noorul Huda Shah. “We have been plagued by the epidemic of hatred for years. We lost East Pakistan by being sick with the same epidemic. Only writers, poets and intellectuals have the cure for the decrease in hatred. Zahida Hina said that despite the cloud of war on the borders and the global epidemic, the convening of the Urdu Conference is welcome. All language speakers in Pakistan should get their due. Shah Mohammad Murree said that they are working for the promotion of literature in Balochistan. For the betterment of the society, writers and intellectuals have to work round the clock. Well known writer Hasina Moin said that she loves Urdu language. The one who loves and shares is never disappointed.