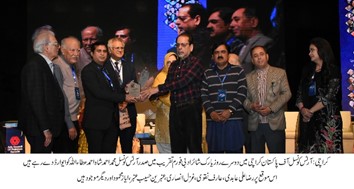 “After Ghalib no one could adopt his versatility” said Shamim Hanfi in a session on Ghalib at Arts Council of Pakistan Karachi. The session was part of the ongoing 12th international Urdu Conference at Arts Council of Pakistan Karachi on 150th death anniversary of famous Urdu Poet of 18th century Mirza Asad Ullah Khan Ghalib. The session was chaired by famous writer and Critic Shamim Hanfi who came from India to attend the conference where Hero Ji Kataoka, Tahseen Faraqi and Nouman ul Haq presented their papers on the Ghalib’s life, art and poetry. The session was hosted by Nasira Zubairi.

Hero Ji Kataoka said that Ghalib has been translated into multiple langue’s in the but his poetry Book Devan e Ghalib is amazingly presented the diversity of his thoughts and his grip on different subjects. He differentiated the different era’s of Ghalib poetry and themes of the poetry.

In the second session of the first day of International urdu Conference famous narrator Zia Muhiyodin read the Ghalib’s poetry where famous artist and music head of NAPA famous sattar player Nafees Khan with his students presented classical music on the poetry of Ghalib. Thousand were attending in the main auditorium where more then that were waiting and watching Zia Mohydin in the lawn of Arts Council.

The last session of the first day of 12th international Urdu Conference was entitled as “Fahmida Riaz Celebrations”. In this session Fahmida Riaz, Yasmeen Hameed, Noor Ul Huda Shah, Anees Haroon, Fatima Hassan, and Mujahid Baralvi paid homage to famous poetess, critic and writer Fahmida Riaz on her first death anniversary. Khalid Ahmed presented Fahmida Riaz’s poetry and proses in the session. At the end of the day Famous classical dancer Sheema Karmani performed on the Fahmida Riaz poetry theme “Sangdil Rawajon” with her team. The performance was much appreciated by the audience.

Yasmeen Hameed presented her paper on “Modern poem and the changes in the ways of feelings”. She said with the other developments in modern times the way of poems and the way of feelings has also been changed. In today’s world, people think and act in a very different way. She said, “With time the feelings in the poetry are more stick to the realism and closer to materialism.”

Mubeen Mirza presented his paper on “Modern Poetry: Anxiety and possibilities”. The said today the question of whether poetry will exist in the coming future or not is one of the most important issues before us. Some time the problem becomes more critical of its existence, particularly in the complex behaviours of modern times. He said that the poetic conferences were the way to learn and understand poetry, but these days these conferences are the part of entertainment and no one head up to the actual cause of these conferences. He told me that Europe is discussing the different possibilities of literature and poetry in the coming era.

Dr Fatime Hassan discussed the “The layers of feminism in the modern poetry”. She said that women are now more energetically participating in the poetry in Ghazal and pomes, Kishwar Naheed write both in Ghazals in the poem where Fahmida Riaz has less in Ghazals, but her lyrics are revolutionary. Her write-ups are so energic and logical, where Parveen Shakir has great fame in poetry. Shadab Ahsani presented his paper on “Urdu poetry and Pakistani narrative”. He said that no nation could exist without a narrative; the existence of Pakistan depends upon its description. Tanveer Anjum presented his paper on the “Urdu prose poems and the post-modern situation” where Rukhsana Saba gave her article on the “Long poems in the 21st century” she said the famous modern poetry is in the shape of long poems.

In the second session of 2nd day of 12the International Urdu Conference at Arts Council of Pakistan Karachi hold a conference by York Shyer Literary Forum Award which was hosted by Ghazal Ansari. The York Shyer Literary forum presented two Lifetime Achievement Award to Shahnaz Noor, and she is a poetess from Pakistan who also has a melodious voice and Ahmed Atta Ullah who is a poet from Kashmir. The award committee Ayaz Mahmood chaired the session. The famous broadcaster presented the awards Raza Ali Abdi, He congratulated the president Arts Council of Pakistan Muhammad Ahmed Shah for 11th successful International Urdu Conference.

The third session of the 2nd day of 12th international Urdu Conference opened with the discussion on “An analysis of Nahat in modern times”. The session chaired by Iftikhar Arif, Theseen Faraqi and Halal Naqvi and discussant were Aziz Ahsan, Farasat Rizvi, and Tahir Sultani. Famous poet Iftikhar Arif said that Nahat should be judged on the standards of literature if someone is writing Nahat for the sake of reward but this cannot be considered in the literature. If we collect all the poetry on Prophet PUBH it will be as much as the poetry in Urdu, but some people have to make it business and those who were writing the real Nahat left in darkness without any consideration. He said that Iqbal was one of the greatest poets of writing Nahat, he did a lot of work on Nahat and no one else did so. Writing a Nahat not only demanding knowledge but respect and belief as well. Nahat doesn’t belong to any sector group or religious people it is universal. Nahat is as like as other poetries. The very first poet of the Nahat was Hazrat Abu Talib the uncle of Prophet Muhammad PUBH and it continues since that. In modern times, many people have been done their Ph.D. on Nahat.

Aziz Ahsan read his paper on “Modern Urdu Naat – Topics and limitations”. He said that without the Prophet PUBH the universe cannot have any existence, Poetry was famous in Arab and they started it since then Nahat is alive. He added that many famous poets of modern time used to write Nahat including Ameer Minai, Amed Raza Bralvi, Altaf Hussain Hali, Allama Iqbal, Shakeel Badavani, Maulana Zafar Ali Khan, Maulana Mahar al Qadari, Hafeez Jhalandri, Raghib Murad Abadi, Adeeb Ray Poori, and Iqbal Azeem. Tahir Sultani paid tribute to Ejaz Rahmani and his work in the Naat Literature where Farasat Rizvi presented his paper on “An evolution in the modern monody in Pakistan”. The session was hosted by Aziz Uddin Khaki.

Irfan Javed said Asghar Nadeem is a famous writer of our era. He is one of the drama writers whose fame is beyond the boundaries of the country. Zia Ul Haque said Sabir Zafar is a poet who attracts people towards his poetry and Sabir Zafar has his identity in the modern Ghazal in the culture and art and postmodernism. Nouman Al Haqu said Fatima Hassan’s book “Faslon sa Mavra” is a masterpiece in literature. Fatima Hassan is serving the Urdu language for so many years.

The fifth session of the 2nd day of the Urdu conference hold “Urdu and Balochi Poets” and the discussant were Afzal Murad, A.R. Dad, Ghafoor Shad and Waheed Noor where the session was hosted by Imran Saqib. Afzal Murad said that the Baloch culture is essential for Baloch poetry. He said Baloch poetry carries the theme of resistance and struggle as it is part of the Baloch culture. Ata Shad said Urdu poetry has been translated in Balochi Language as well as Balochi poetry in the Urdu Language. He said Urdu is lingua Franca, but we need to concentrate on the native languages in Pakistan as well.